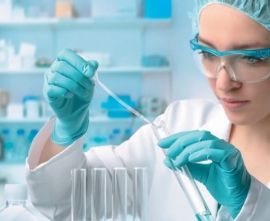 Providing analytical data on the comparison between a biosimilar and the reference product is a primary consideration in the development of biosimilars.

Analytical chemists, however, are increasingly challenged to develop routine and automated characterization workflows for innovator and biosimilar biologics that can move these products forward through the development stages and into commercialization. Although analytical scientists have long been immersed in the traditional field of small-molecule pharmaceuticals, they are increasingly required to shift focus to large-molecule characterization and analysis with the growth of biotherapeutics in the pharmaceutical industry pipleline (2).


As a result, demand has increased for chromatography and mass spectrometry technology providers to design instrumentation, software informatics, and workflows to support protein analysis studies. In addition, these analytical tools are required to be more accessible and automated to conduct acquisition, processing, and reporting from characterization and comparability studies that are needed for innovator and biosimilar approvals (2).

Analytical Assurance
BioPharm: In biosimilar drug development, long-term efficacy and safety are largely based on clinical studies that have already been done on the reference biologic, but are these studies alone considered sufficient to ensure that a biosimilar can comparably replace the reference product?

Hurley (PPD Consulting): Longterm safety and efficacy of a biosimilar cannot be based on past clinical studies with the reference product alone, but rather on abbreviated data that include comparative clinical studies following the demonstration of analytical similarity (comparability). It is also important to note that a biosimilar is not regarded as a generic of a biologic. That is due to the natural variability and inherent complexity in manufacturing of biologics for which the demonstration of identical quality attributes (pharmaceutical equivalence) as required by the authorities is extremely difficult, if not impossible.

The major regulatory authorities have issued guidance documents that clearly outline the expectations for developing a biosimilar. They emphasize that a step-wise approach should be taken to demonstrate there are no clinically meaningful differences between the biosimilar and the reference product. The outlined step-wise approach involves a detailed evaluation of the proposed biosimilar product against the approved reference product, first with respect to extensive CMC [chemi st ry, manufacturing, and controls] characteristics, then by relevant noncl inical performance, and finally by clinical phamacokinetic/ safety/immunogenicity/efficacy parameters in an appropriate and sensitive population. Any proposed deviations from the issued guidance would be expected to be thoroughly justified and discussed through appropriately planned regulatory agency interactions at key milestones throughout a sponsor’s development program.

Guiding Principles
BioPharm: What further analytical studies would be needed to ensure biosimilarity to the reference product?

Wu (PPD Consulting): The major regulatory agencies, such as FDA and the European Medicines Agency (EMA), have issued detai led guidance documents that provide guiding principles on how analytical tests should be performed to assess the analytical similarity or comparability between a reference product and a proposed biosimilar. These tests must be able to compare the physicochemical and biological characteristics of the two products, in some cases down to the fingerprint level. Specifically, these tests are designed to cover the primary, secondary, and higher order of protein structures; the purity and impurities; the post-translational modification, such as glycan profiles; the potency or biological activities; and other functional tests, such as receptor binding.

Analytical similarity by itself is not designed to ‘ensure’ biosimilarity, but is a first step in the stepwise approach to the development of biosimilars. The comparability/similarity of the quality attributes must be tested to determine the degree of preclinical and clinical studies that may be needed to bridge the potential uncertainties (e.g., immunogenicity) that cannot be addressed by analytical tests alone. Under the "totality of evidence" concept, the approvability of a biosimilar does not rely on additional analytical studies alone to ensure biosimilarity.

Unlike a generic, it is impossible for a biosimilar to show that its quality attributes are identical to the reference product due to the inherent complexity of protein molecules. In fact, all of the biosimilars approved in the United States are considered by current legislation to be new biological products without official interchangeability with the reference product. FDA has indicated that interchangeability likely will be handled in the post-approval setting. However, this is a topic under significant and lengthy discussion within the agency. The EMA does not address interchangeability nor substitution in its guidance documents, but rather leaves it to individual European Union member states to further deliberate.

Analytical Advances
BioPharm: What advances have there been to either analytical equipment, technique, methodology, or approach to support biosimilarity testing in biosimilar products in development?

Tabler (PPD Laboratories’ bioanalytical lab): Due to potential minor structural differences between a biosimilar and innovator product, there has been debate on whether a single PK immunoassay could be used to assess biosimilarity. Our early approaches in 2010 used separately validated assays for each analyte. The alternative was to use a single assay, with the biosimilar as the reference standard and the approved product(s) crossed into the assay.

Advantages of the single assay approach were many. In addition to simplifying data interpretation, it allowed for blinded study sample analysis without doubling the number of samples analyzed. The single assay approach became the standard in the industry after 2014 when the uniform approach for determining bioanalytical biosimilarity recommended by Marini et al. (3) became widely adopted.

For immunogenicity assays, the current industry practice is also to use a single assay, with the biosimilar as a capture reagent (and as the conf irmatory drug) when assessing antidrug antibody (ADA) for both the biosimilar and the approved products. Using this approach is considered reasonably risk-based, as safety and immunogenicity have presumably already been assessed for the innovator.

Evolutions in signal amplification and dissociation techniques have led to significant improvements in sensitivity for immunoassays supporting PK and in drug tolerance (ability to detect ADAs in the presence of biologic drug) for immunogenicity assays. This adds value to data generated, but can be challenging when contemporary results for the biosimilar are compared to historical data for the innovator. Advances in equipment and software have also led to improvements in automation, both in the laboratory and in data processing. Automation has been key in allowing ligand-binding assays to meet the intense throughput and turnaround requirements of biosimilar studies.