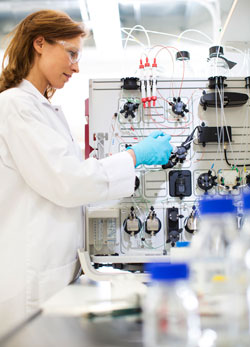 Therapeutic monoclonal antibodies represent one of the fastest growing segments in the pharmaceutical market. The growth of the segment has necessitated development of new efficient and cost saving platforms for the preparation and analysis of early candidates for faster and better antibody selection and characterization. We report on a new integrated platform for automated harvesting of whole unclarified cell-culture broths, followed by in-line tandem affinity-capture, pH neutralization and size-exclusion chromatography of recombinant antibodies expressed transiently in mammalian human embryonic kidney 293T-cells at the 1-L scale. The system consists of two bench-top chromatography instruments connected to a central unit with eight disposable filtration devices used for loading and filtering the cell cultures. The staggered parallel multi-step configuration of the system allows unattended processing of eight samples in less than 24 hours. The system was validated with a random panel of 45 whole-cell culture broths containing recombinant antibodies in the early profiling phase. The results showed that the overall performances of the preparative automated system were higher compared to the conventional downstream process including manual harvesting and purification. The mean recovery of purified material from the culture-broth was 66.7%, representing a 20% increase compared to that of the manual process. Moreover, the automated process reduced by 3-fold the amount of residual aggregates in the purified antibody fractions, indicating that the automated system allows the cost-efficient and timely preparation of antibodies in the 20–200 mg range, and covers the requirements for early in vitro and in vivo profiling and formulation of these drug candidates.