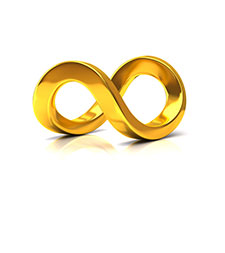 In nearly all other manufacturing technologies, cost considerations dictate that continuous production will be the rule. But in bioprocessing, the normal evolution from batch to continuous operations has not moved as quickly as many had expected.

Continuous processing upstream has been around for decades as perfusion (e.g., fiber-based perfusion bioreactors for fused-cell hybridoma culture in the 1980s). But that’s essentially the only continuous-adapted upstream unit process, with such things as culture media and additives preparation still done in batch processing. In some respects, perfusion has overall been a commercial failure. Sales of the leading alternating tangential flow (ATF) perfusion systems from leading suppliers, after more than 15 years, are under $20 million. And continuous processing downstream is still largely lacking and, where implemented, involves just a few of the many unit processes involved in downstream processing. Multi-column, countercurrent, and other variations of continuous chromatography units are just starting to enter the market. The classic and still predominant approach to bioprocessing, both upstream and downstream, remains batch processing, with manufacturing batch fluids essentially moving incrementally en-masse from one process step and set of equipment to the next.

Downstream processing continues to create bottlenecks in production, and improvements in batch processing are not really emerging. Therefore, the industry continues to seek solutions from innovators for better continuous processes that offer further process intensification and lower costs. In fact, 70.6% of bioprocessing professionals are either testing continuous bioprocessing downstream technologies or considering them. This is up from 68% based on data from our 2016 Annual Report (1).

According to BioPlan’s 17th Annual Report and Survey on Biopharmaceutical Manufacturing Capacity and Production (2), there has been a slow increase in assessment of the various continuous bioprocessing options over the past five years, and the data support ongoing interest in the coming year (see Figure 1). Approximately 55% of facilities surveyed are actively or informally evaluating continuous processing technologies in the coming year. 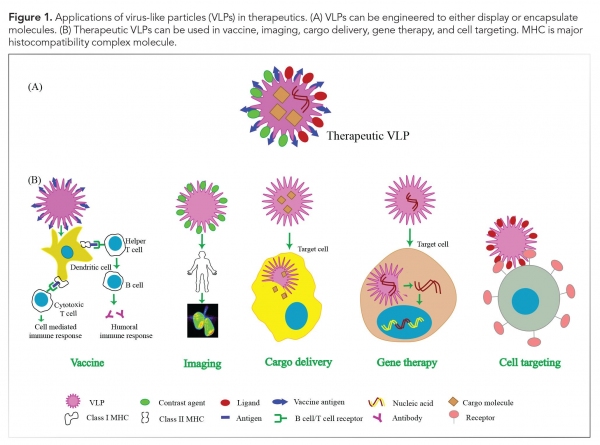 Figure 1: Facilities evaluating continuous bioprocessing (downstream) technologies in the next 12 months 2016 2020. (Figure courtesy of the author)

Although there are a number of technologies providing process intensification and continuous purification steps, it appears that more robust continuous chromatography technologies, such as simulated moving bed (SMB) and periodic countercurrent chromatography, are generally not yet ready yet for commercial-scale adoption (other than adoptions performed using single-use upstream equipment generally limited to 2000-L scale).

Contract manufacturing organizations (CMOs) are often on the leading edge of new technology adoption.  For continuous bioprocessing and process intensification, BioPlan’s Annual Report shows that significantly more CMOs will be testing these technologies over the next 12 months (53% of CMOs will be evaluating downstream options, vs 38% of biomanufacturing facilities).  On the upstream side, again it is the CMO outsourcing organizations that are seeking better products and more improvements.  More CMOs than biomanufacturers (40% vs 28%) are indicating they want vendors to focus greater efforts on developing continuous upstream technologies (1).

Budgets for adoption of continuous bioprocessing

BioPlan data in general indicate that the direction of the industry is more toward single-use novel devices, those that allow rapid transitioning from project to project, and options for continuous bioprocessing. Some of these technologies also support the increasing demand for biologics that may be called for in smaller quantities. 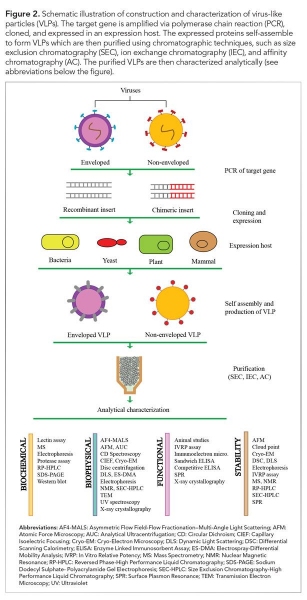 There are many benefits to operating bioprocesses continuously rather than in batch mode, with many of these similar and complementing those of single-use and modular systems:

- Increased productivity: Because much of the bioprocessing equipment is operated continuously, there is little need for large transfer/storage vessels and no halts between processes. Bioprocessing thus tends to move much more smoothly.

Many upcoming continuous bioprocessing technologies are very novel. For example, a single 50-L bioreactor is expected to be able to manufacture the same quantity of product, often at better quality, comparable to a 5000-L bioreactor over the same time period. Case studies and other reports of such performance will further promote rapid adoption. There will be increasingly rapid adoption of single-use systems for new commercial manufacturing over the next five years; and continuous bioprocessing, particularly upstream processing, is expected to follow a similar trajectory. Use of continuous bioprocessing is likely to further increase with the arrival of more hybrid systems that use bolt-on-type technology, which retrofit components unit operations for existing systems. Other conventional downstream continuous adaptable technologies, such as centrifugation, will also see increasing adoption in coming years. Potentially revolutionary capillary fiber perfusion bioreactors and other new technologies, including those for downstream processing, will be likely coming online and be more widely adopted for commercial manufacture over the next 10 years.

When respondents were asked about their ‘single most’ important biomanufacturing trend, or operational area on which the industry must focus its efforts, upstream and downstream continuous bioprocessing declined dramatically over the past six years, from 9.1% to 1.25% for upstream, and 10% to 4.7% for downstream continuous bioprocessing (Figure 3). 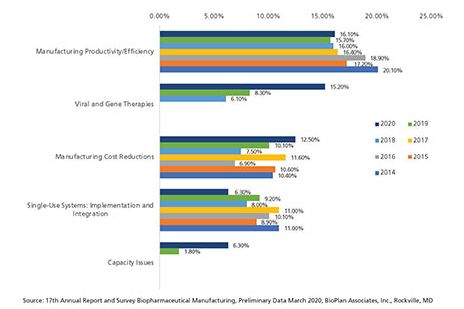 Although this is beginning to change, implementation of continuous bioprocessing is and has been slow (see Figure 4). At best, a few unit process/steps both up- and/or downstream have been implemented as continuous by a minority of facilities. Some commercial biopharmaceutical products that essentially require perfusion’s generally milder/less intense processing conditions, including Factor VIII (the largest recombinant molecule biopharmaceutical) and coagulation factors, have been manufactured for decades using perfusion (other products use continuous centrifugation). 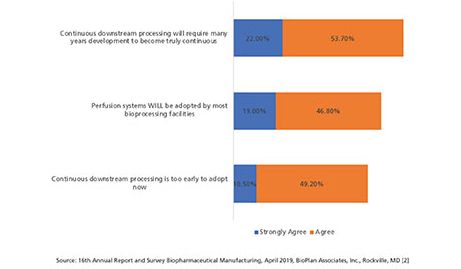 BioPlan studies have shown approximately 5% of bioreactors that are over desktop-size use perfusion, mostly for feeder, not production, bioreactors. There is more adoption of perfusion for early stage vs. large/commercial-scale manufacturing. BioPlan studies have shown that few processes are scaled-up, particularly for commercial good manufacturing practice (GMP) manufacture, using perfusion in continuous upstream bioprocessing CP USP. Perfusion adds considerable mechanical complexity and regulatory uncertainties (i.e., it is avoided for GMP manufacturing, expert staff are needed, etc.), as well has having limited equipment options and universal industry inertia restraining adoption.

Survey data suggests that bioprocessing professionals may believe continuous processing is more ready for broad adoption for more unit processes than it currently is. Notably, continuous processing equipment manufacturers and users report that many of the problems long associated with perfusion and continuous bioprocessing have been resolved in recent years through the application of innovative technologies, including new developments in single-use equipment.

On the other hand, perfusion processing is now significantly less complex, less prone to contamination, and more readily scalable than previously. Negative assessments from within the industry of continuous perfusion fed-batch processing overall may reflect a lack of direct exposure or experience with continuous technology.

In BioPlan’s annual report, for example, key areas where most respondents reported they perceive perfusion as presenting more concerns (vs. fed-batch) included: