Advances in techniques and single-use systems are revolutionizing vaccine manufacturing.

The vaccine industry, particularly, in major Western markets, continues to be dominated by a few major, long-established players that primarily manufacture aging, long-marketed, non-recombinant (nongenetically engineered) vaccines. The industry, however, will be changing in the coming years and this change may come rather rapidly. According to BioPlan's recently released analysis of 10-year industry trends (1), a confluence of technological advances in bioprocessing is making vaccine manufacture cheaper, faster, and simpler. These advances include:


Single-Use Adoption
BioPlan's 10th Annual Report documents increasing adoption of these technologies and their impact on biopharmaceutical manufacturers. Survey data show that bioprocessing at pre-commercial scales, such as manufacture for clinical trials, is now thoroughly dominated by SUS (i.e., disposables) use. This increase included 78% of those surveyed reporting current use of SUS bioreactors and 92% using SUS filter cartridges at some level in bioprocessing (see Figure 1). 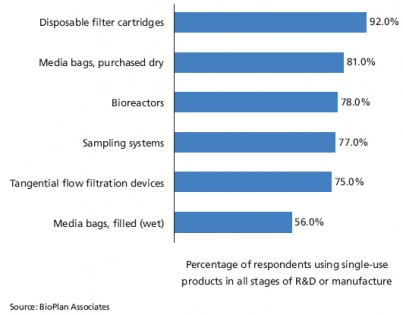 SUS have moved into large-scale vaccines manufacture more slowly, partly due to the demands for large-scale equipment. In the BioPlan study, vendors were asked if they provide sufficiently scalable single-use disposables and techniques. Overall, 53% of the industry considers scale to be a significant adoption restriction. And vaccines manufacturers place inability to scale up SUS devices high on the list of concerns. SUS involve one-time use of bioprocessing equipment composed of plastics, not traditional stainless steel. SUS allow flexible manufacture when, and at the scale needed, with substantial reductions in costs and time, including presterilized equipment. In contrast, stainless-steel bioreactor-anchored facilities require costly and complex infrastructure, which further includes complex piping, including steam used for sterilizing stainless-steel equipment so it may be reused, which adds weeks to batch turnaround time.