More efforts are needed to raise awareness of biosimilars among physicians and patients in Europe and address scepticisms about the quality and safety of biosimilars. 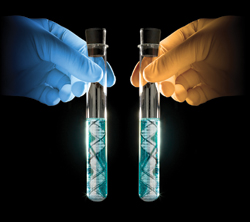 The use of biosimilars continues to increase strongly in Europe, 10 years after the first biosimilar, a somatropin, was approved by the European Union (EU). With approximately 20 new biosimilars authorized for marketing across the EU since 2006, prescribing of the drugs is increasing at a rate of 11% a year, similar to the worldwide growth rate, according to figures from IMS (1).

There continues to be widespread scepticism in the region about the quality and safety of biosimilars, and sometimes their efficacy, among physicians and patients. This issue is often because of a lack of awareness about the nature of these medicines. A major doubt is frequently their degree of comparability with the original biologics. Yet both regulators and producers believe that more could be done to eliminate uncertainties about biosimilars by making improvements at the production and preclinical stages, for example by implementing the latest analytics and other imaging technologies to detect impurities and unacceptable differences in structures and functionalities.

The EU was the first major regulator in the world to establish a legal framework for the marketing of biosimilars. This legislation has since been supplemented by an overarching guideline on standards for quality, safety, and efficacy of the products, which has been followed by a series of guidelines on class-specific and non-clinical and clinical aspects. These guidelines have been drawn up by the European Medicines Agency (EMA), the London-based EU-wide authority that approves biosimilars.

Market trends
Biosimilar versions of granulocyte-colony stimulating factor (G-SCF) have now gained a market share of more than 50%, Carol Lynch, global head of Sandoz Biopharmaceuticals said during the conference (2). The estimated cumulative savings from biosimilar epoetins had amounted to $480 million (€551 million) in Germany alone in five years, she added.

The launch of biosimilars also stimulates growth in product-specific markets for biological treatments. In the United Kingdom, the size of the country’s market for filgrastim, a short-acting G-CSF, more than doubled from 2008-2014 (2) after the launch of a biosimilar version. Per Troein, vice-president, strategic partners, IMS Health, which published a study on the potential for biosimilars in Europe in March 2016 (3), said that as a result of a number of top-selling biologics coming off patent shortly, almost 50 new biosimilars are under development (3).

Perceptions on biosimilars
The IMS study, however, has shown that not all EU markets are ready to profit from the benefits of the forthcoming new generation of biosimilars. This is because of a lack of competition in some countries and an absence of physicians at the heart of the decision-making process to give patients access to biosimilars. In this respect, education of physicians and other stakeholders about the advantages of biosimilars had become a crucial factor.

There have been sharp differences between, and even within, countries in the level of uptake of individual biosimilars. Biosimilar infliximab, the first biosimilar monoclonal antibody (mAb) to be approved by EMA in 2013, has had an uptake varying from approximately 10-50% in the five leading EU markets of France, Germany, Italy, Spain, and the UK, according to Troein (1). In the Nordic countries and the UK, the variation in prescribing of the product, which competes with Johnson & Johnson’s Remicade, a treatment for rheumatoid arthritis and similar conditions, has had a similar range of 20-50%. The differences were due to the presence or absence of strong national champions of the biosimilar versions, national tender systems, incentives to prescribers, and fragmented decision making within countries, Troein said (1).
Benedicte Lunddahl, team leader, pharmacovigilance at the Danish Medicines Agency, pointed out that a key factor was the “information gap,” especially among physicians and patients, which was causing misunderstandings and lack of awareness about biosimilars.

The Danish Council for the Use of Expensive Hospital Medicines (RADS) recommended the use of Remsima, the biosimilar infliximab, in preference to Remicade because it was less expensive. Remsima, then marketed by Hospira in partnership with its developer Celltrion of Korea, won a national tender to supply it to all Danish hospital pharmacies that were able to switch patients to the product. The decision was opposed by doctors and patients’ organizations. “Patients are concerned about the new product [while] physicians are not comfortable about explaining the principle of biosimilarity,” Lunddahl explained (4).

The issue of variability
A drive was initiated to reassure doctors and patients including a pharmacovigilance action programme to encourage reporting of adverse effects, communications with patients groups, and wide availability of information. One important message to patients is that the variability between the reference product and a biosimilar is similar to the variability between batches in the production of any biological medicines, Lunddahl said. In other words, they both have an inherent variability.

The view that quality aspects of comparability should be highlighted in communications on biosimilars was shared not only by the regulators but also the producers. “Biosimilars have to have the same or better quality when compared to their reference biologics,” said Klaus Martin, chief scientific officer, Polpharma Biologics and chair of the market access committee of the Medicines for Europe’s biosimilar medicines group. “When understanding [the issue of quality], it becomes evident that biosimilars are clinically equivalent to the original and can be switched safely,” he added in an interview with BioPharm International.

EMA stresses on analytical data
EMA has been shifting to a policy of giving greater importance to analytical data at the production and preclinical stages when assessing applications for biosimilar approvals. At the start of EMA’s regulating of biosimilars, there were doubts about whether the existing analytical methods for characterizing biologicals, especially complex ones, were adequate, said Martina Weise, vice-chairman of the agency’s biosimilars working party (BMWP) who stressed she was speaking in a personal capacity. But since then, there had been rapid advances in analytical sciences. The efficiency of mass spectrometry had increased to such an extent that its sensitivity had soared 10,000 fold in 10 years and 10 million fold in 20 years, according to Weise (5).

Biosimilar applications must now be supported by more state-of-the art analytical data with more detailed comparisons between structures and functions and more pharmacokinetic (PK) and pharmacodynamic information. Application dossiers have to give a quality target product profile (QTPP) based on the characterization of multiple batches of the reference product. If necessary, the manufacturing process would be adjusted to achieve the QTPP.

The focus would be comparisons of in-vitro studies to characterize extensively the functions and activity of the molecule. “[This approach] is usually more sensitive in detecting differences than in vivo studies,” said Weise, who is head of the diabetes/cardiology unit at Germany’s Federal Institute for Drugs and Medical Devices.

Assessment of biosimilars
Increasingly, regulators are viewing biosimilars as requiring assessments similar to those applied to changes in the manufacturing processes of original biologicals. These changes are being judged in a way that does not necessitate the provision of any clinical evidence. With biosimilars, the strategy is to require enough quality data from the production and preclinical stages to build a reliable scientific bridge to the clinical trial data of the original. The assessment of the comparisons between the physicochemical and functional data of a biosimilar with its reference product now corresponds with the regulatory assessment made between a new manufacturing process for an original product and its previous ones. The new process is, from the regulatory viewpoint, like that of a biosimilar’s.

“Originator molecules have undergone multiple changes in their production processes,” said Martin. “A patient, who has, for example, been on Remicade for 10 years would have been treated with 15-25 biosimilars of the original molecule, as J&J introduced at least 36 process changes to the molecule, in some cases, significantly altering its physicochemical properties.”

Often the genuine biosimilar is assessed more rigorously by the regulators than the process changes for the reference product. The big challenge is to convey this information to physicians, patients, and other stakeholders in such a way that they gain a full understanding of the quality issues with biosimilars.