Suppliers indicate prices for single-use equipment are likely to increase. 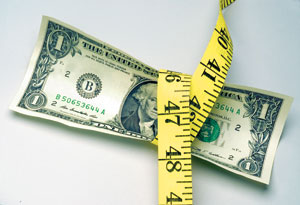 Contract manufacturing organizations (CMOs) have been enthusiastic adopters of single-use technologies in recent years, lauding their range of benefits and attributing significant improvements to their use. In fact, according to the latest industry study from BioPlan Associates (1), there appears to be one aspect of single-use application that CMOs feel is inhibiting adoption: The cost.

As part of the BioPlan study, factors that may restrict the use of disposables were examined and general agreement was found among both biomanufacturers and CMOs when segmenting these two groups. The top two concerns for each group, for example, were “breakage of bags and loss of production” and “leachables and extractables”, with the former the most widely held among biomanufacturers and the latter most common among CMOs.

Other common pain points for both groups include material incompatibility with process fluids, single-source issues, and the high cost of disposables, with each of these a factor in restricting adoption of single-use devices for between 55-60% of respondents. Meanwhile, CMOs (62.5%) were far more likely than biotherapeutic developers (40.4%) to cite the lack of clear regulatory guidance on leachables and extractables (L&E) as a hindrance.

When the more than 200 survey respondents were asked to identify the most important reason for not increasing use of disposable technologies, a new ranking of obstacles was found, as differences between developers and CMOs emerged (see Figure 1). 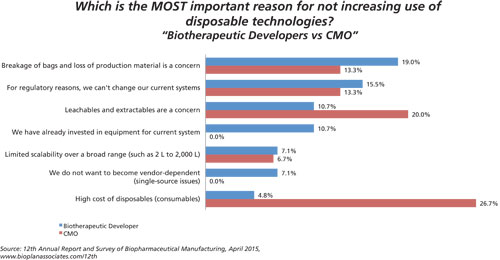 Figure 1: Selected “Most Important Reasons” for not increasing use of disposables, biotherapeutic developer vs. CMOs.

For biotherapeutic developers, the most crucial reasons restricting greater use of disposables are:

• “Breakage of bags and loss of production material is a concern” (19% of biotherapeutic developers)
• “For regulatory reasons, we can’t change our current systems” (15.5%).

For CMOs, however, the top reasons given were:

• The high cost of disposables (consumables), at 26.7% of respondents
• Leachables and extractables are a concern (20%).

Cost obstacles for CMOs partly exist because these service suppliers need to justify their cost to their clients. CMOs also have significantly more in-use experience with these devices, so cost rises to the top as other factors decrease in importance.

One area that CMOs indicate has not been worked out is leachables and extractables. For example, 13% of CMOs worry for the lack of regulatory guidance on L&E—noting this as their top obstacle. In combination with other concerns about L&E, these could be viewed as the leading technical challenge to CMO adoption.

It is interesting that single-use equipment is generally accepted as providing cost savings, yet the single most-cited factor restricting further use by CMOs is cost.

Given that CMOs expect to increase their budgets by as much as 6% for new technologies to improve upstream and downstream efficiency—with single-use equipment presumably a part of this spending—budgetary constraints are not holding back single-use adoption.

Is single-use too expensive?
The relatively rapid growth in use of single-use equipment for early-stage (and increasingly commercial stage) manufacturing may suggest that costs are considered reasonable. Yet as in-use experience grows, it is expected that the high cost of some of these consumables will create friction and push-back. As industry adoption increases, single-use products in biopharmaceutical manufacturing will likely see the same levels of pricing pressure as other similar equipment. Vendors can expect to see increasing price push-back from their customers, and potentially greater levels of competition.

Satisfaction with vendors
The influence of pricing as a selection criterion is unsurprising, of course. Cost factors are right up there with product quality, on-schedule delivery, and the provision of L&E data that regulators will accept. However, for this industry, and most others, cost factors are a commonly complained about issue. Frankly, it’s rare to find buyers that are particularly satisfied with the cost of anything they buy.

The dissatisfaction with the cost of single-use devices among buyers of single-use devices is more likely the result of buyers not perceiving the full value that these technologies can provide. This perception is partly because this is a relatively new segment and there is little economic data, or in-use experience and cost justifications, that are readily available. As more data are developed, it is likely this dissatisfaction gap will decrease. In addition, as more fully integrated single-use systems facilities are brought online, the value of a totally disposable operation will begin to be realized.

In examination of the gap between the importance of various factors—including pricing and the satisfaction end-users have expressed regarding their single-use vendors—approximately one in five respondents (21.6%) reported being “satisfied” or “very satisfied” with single-use device costs. By comparison, close to three-quarters reported being satisfied with the quality of the products (see Figure 2). 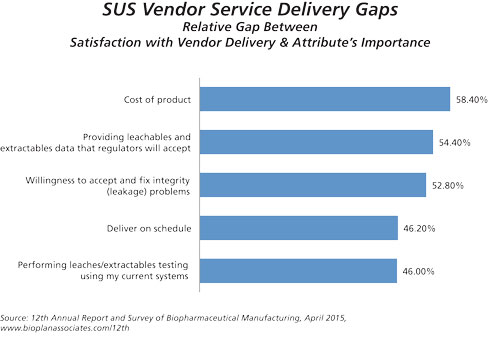 In any case, satisfaction with single-use pricing is unlikely to change anytime soon. Separately, the BioPlan study also surveyed 164 suppliers to the biopharmaceutical industry on issues associated with industry growth. Suppliers reported having increased their pricing for disposable, single-use devices by an average of 3.1% in 2014, about the same average price increase as the year before. Suppliers, however, projected an average 3.8% increase in pricing for disposable, single-use devices this year, outstripping projected increases for other biomanufacturing-related areas including services, consumables, and instruments. These results suggest that the overall market for single-use equipment is trending towards higher prices, most likely due to consistently high demand.

Does cost really matter to CMOs?
Single-use equipment costs are unlikely to decrease and, as noted, complaints about product costs may be simply lack of understanding of the economics associated with an effective application of the technology. The market demand continues, though, and CMOs give a long list of reasons for increasing use of disposables, from faster campaign turnaround time (85.7%) and reduced time to get the facility up and running (75%) to decreased risk of product cross-contamination (68.8%) and the elimination of cleaning requirements (58.8%).

So given the benefits, does the cost of these devices matter? Indeed, while CMOs are more apt than biotherapeutic developers to find fault with single-use pricing, they’re also more likely in general to recognize the benefits they afford.

While CMOs may ultimately want the cost of single-use products to come down, high costs have not stunted their adoption rates to a considerable degree. Although CMOs can pass the costs of such single-use devices and operations on to their clients, allowing CMOs to reduce the potential need for capital expenditures, there is an additional factor noted that suggests single-use systems device costs are not fully relevant—almost 9 in 10 (86.4%) of CMOs surveyed report at least “some” productivity improvements due to the use of disposable/single-use devices.

Thus, CMOs appear to be addressing their most crucial trend in global biomanufacturing—the need to improve productivity and efficiency, by adopting single-use devices. So complaints about costs may be a bit of disingenuous, especially in relation to the productivity benefits reportedly being delivered.