Contract Manufacturing Through the Years 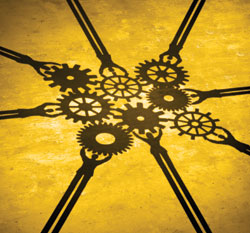 The 40 years during which Pharmaceutical Technology has served the bio/pharmaceutical industry have been years of momentous growth and change in the way drugs are discovered, developed, manufactured, and sold. Contract development and manufacturing organizations (CDMOs) have long played a part in the industry’s growth, but it is only in the past 20 years that they have become a critical element in bio/pharmaceutical company operations. In light of Pharmaceutical Technology’s 40th anniversary, it is appropriate to review the CDMO industry’s evolution and outlook.

Phase one of the CDMO industry includes the years prior to 1996. In those years, there were three primary participants in the CDMO industry: global bio/pharma companies that provided manufacturing services to each other; fine chemical companies providing intermediates; and a small number of dedicated service providers offering specialized capabilities.

It was quite common in this period for the major bio/pharma companies to manufacture products or intermediates for companies of similar stature, especially when it could be done without enabling competition. The business was conducted on a relatively informal basis; although, a few companies, including Schering Plough and Pharmacia & Upjohn, had formal units with dedicated sales teams.

API and GMP intermediate manufacturing during this time was just a piece of the fine-chemical industry, alongside agrichemicals, food ingredients, and various specialized applications. The generic API business was still dominated by European companies, and custom manufacturing was a small piece of the business as the global bio/pharma companies had large internal laboratories and manufacturing facilities for process development and commercial production. There wasn’t a biologics contract manufacturing sector, and early entrants such as Amgen and Genentech had to build their own facilities.

The CDMO industry really took off in the late 1990s. Starting in 1996, Custom Pharmaceuticals became Patheon and began acquiring facilities in Europe from global bio/pharma companies. Lonza, already a major player in the contract small-molecule API manufacturing business, acquired Celltech and began establishing its position as a leader in contract biologics manufacturing. Cardinal Health, looking to diversify beyond its core wholesale distribution business, acquired R.P. Scherer, the first piece of what became today’s Catalent. In Europe, a number of new drug product CDMOs were established with private equity backing including Nextpharma, Haupt, and Famar.

Three factors contributed to the industry’s launch during the 1996-2007 period. The first was the shedding of excess capacity by global bio/pharmaceutical companies as older products went off patent and as the establishment of the European Union and North American Free Trade Agreement enabled freer cross-border trade of bio/pharmaceuticals. Facilities were usually sold to CDMOs, many of which were formed for the specific facility being sold, at a nominal price and with contracts for legacy products. That enabled the bio/pharmaceutical companies to rid themselves of the assets without negative publicity and costly labor settlements.

A second factor was the explosion of early stage bio/pharma companies, thanks to the maturity of biotechnology and the availability of external funding. Emerging bio/pharma companies rode the coattails of Internet companies to gain access to venture capital and the market for initial public offerings (IPOs). Those early stage companies were unable or unwilling to establish their own manufacturing operations and became core customers of the emerging CDMO industry. To this day, major bio/pharma companies that came of age in that era such as Vertex, Gilead, and Shire remain committed to outsourcing all or part of their manufacturing requirements.

The third factor boosting the CDMO industry was the success of clinical research organizations (CROs). Companies such as Quintiles, Covance, and PPD established themselves as key suppliers of data management, site monitoring, and laboratory services in the late 1990s to both established and emerging bio/pharma companies. Their success validated outsourcing as an effective alternative to in-house capacity for critical development activities, and the relationships with CROs enabled bio/pharma companies to develop critical experience and practices for establishing and managing contract services relationships.

Bouncing back from the financial crisis

The years immediately following the global financial crisis and flood of patent expirations were difficult for the CDMO industry. Emerging bio/pharma companies, one of their core customer groups, suffered a large drop in funding, while mergers among the global bio/pharma companies slowed new drug development. Some CDMOs went out of business while others had to downsize and restructure their operations in order to survive.

The financial crisis created an opening for an important group of players in the CDMO industry--private equity firms. Low valuations and low interest rates combined to provide savvy investors the opportunity to get into an industry whose long-term prospects looked very attractive. The private equity firms brought new capital and financial expertise to the industry, along with the concept of the “roll-up” (i.e., making an initial acquisition in the industry and then build out is capabilities and scope with additional acquisitions). Most importantly, however, the private equity firms were able to recruit top-tier people to run those CMOs, former senior executives from leading bio/pharmaceutical companies as well as experienced operating managers. Big name private equity firms such as Black Rock (Catalent), KKR (Capsugel) and JLL Partners (Patheon) became important presences in the industry.

External funding for emerging bio/pharma companies began to flow again in 2013, and the CDMO market was ready. Since 2013, CDMO development services revenues have grown at 10-15% annually, as have the revenues of API manufacturers.

The success of small-molecule API manufacturers has been particularly noteworthy during this period, as the industry was practically left for dead in the late 2000s, while biologics became a bigger part of the pipeline. The small-molecule API CMOs have benefited from three positive developments. One is the growth in funding for early stage companies with their pipelines of early phase candidates: nothing in drug development happens without API and small-molecule compounds still make up the majority of drug candidates. A second factor has been the willingness of global bio/pharma companies to outsource more of their small-molecule API requirements. This reflects the fact that the small-molecule API technology and supply base are quite mature, so the global bio/pharma companies can confidently hand off their small-molecule needs to CMOs while they focus their internal resources on biologics. More recently, concerns about compliance problems at emerging-market API manufacturers have resulted in more opportunities going to North American and European manufacturers.

The robust environment for contract drug development has fed a frenzy of merger and acquisition activity in the CMO industry as new investors look to break into the industry and current participants look to expand their capabilities. An average of 35 deals per year was done in the 2014-2016 period involving drug product and substance manufacturers, packagers, formulators, and analytical services providers. The pace seems to have picked up in 2017, especially for large deals like Thermo Fisher’s intention to acquire Patheon, the acquisition of Albany Molecular Research (AMRI) by a major private equity firm, and the consolidation of the biologics manufacturing industry by several Japanese strategic investors.

The CDMO industry has established itself as a critical part of the global bio/pharma industry. In the United States, drug product is contract manufactured for nearly 50% of all new drug application (NDA) approvals, and drug substance is contract manufactured for more than 50% of all small-molecule NDA products. It can truly be said that the CDMO industry has enabled the rapid expansion of the emerging bio/pharma company sector as 80% of drugs approved for those companies are manufactured by CDMOs. The same can be said for mid-size companies as at least 60% of drugs approved for those companies are made by CDMOs.

Still, the CDMO industry is very much in transition. Four developments in particular bear close watching.

One is the state of external funding available to emerging bio/pharma companies. The early stage bio/pharma sector has buoyed CDMO industry performance thanks to its dependence on CDMOs for pretty much all of its development and manufacturing requirements. However, their funding has historically been quite cyclical and anything that disrupts investor confidence will dent the flow of new funding to emerging bio/pharma and that could hit the CDMO industry hard.

A second development to watch is how the industry has bifurcated into two major segments as it has matured: innovation-driven CDMOs that offer the most sophisticated capabilities and get the lion’s share of high value new product approvals; and capacity-driven CDMOs that have standard, undifferentiated capabilities and depend on older products and generic drugs to fill capacity. The innovation-driven segment includes less than 10% of the CDMOs in the industry but account for approximately 35% of industry revenues; they have the most advanced technologies, deepest development capabilities and most global regulatory and compliance experience. That gives them the most pricing power and makes them the most desirable strategic partners.

The capacity-driven CDMOs, by contrast, are forced to compete on price and are at risk as the generic-drug business becomes more commoditized. Their margins make it difficult for them to invest in capabilities and compete with the innovation-driven CDMOs. The capacity-driven segment is ripe for consolidation, especially in Europe where labor laws and government procurement practices have kept otherwise-unsustainable operations afloat. We expect to see a shakeout of capacity-driven CDMOs in coming years.

How to address the global bio/pharma sector is a critical strategic issue for CDMOs: with the small and mid-size pharma sectors already highly penetrated, CDMO industry growth will depend to a significant degree on the industry’s ability to gain a bigger share of global bio/pharma’s manufacturing requirements. Big Pharma doesn’t need capacity in the traditional manner in which CDMOs have supplied it, but they are open to new service models that emphasize flexibility, technology, and cost and risk sharing. A number of the innovation-driven CDMOs have crafted offerings that effectively deconstructed the traditional CDMO offering into its component parts like tech transfer know-how, shared overhead, and regulatory expertise, and are putting together customized packages of services that meet the individual company requirements. It will require these kinds of innovative arrangements to get significant penetration into global bio/pharma’s supply chains.

Finally, the impact of new therapeutic and manufacturing technologies bears close attention. New targeted therapies mean that the average volume per product is declining; even when more sophisticated processing commands a higher unit price, overall revenue per product is falling. Some technologies such as autologous cell therapy don’t really fit into the traditional CDMO business model. Developments in manufacturing technologies such as vastly improved yields for biologics, single-use systems, and continuous processing simultaneously require CDMOs to invest in new technologies while making investment in captive capacity more attainable for many companies.

The CDMO industry is robust today and will remain a vital part of the bio/pharmaceutical industry. But significant challenges loom and individual companies will need strong leadership, vision, and operational discipline to succeed.