Design Considerations for a Commercial Cell and Gene Therapy Facility 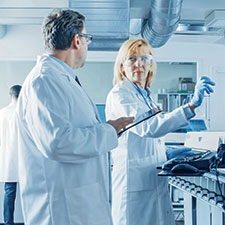 The commercialization of cell and gene therapies has become a reality, prompting deeper considerations of logistics, technology, and design for manufacturing facilities.

With the recent FDA approvals and commercialization of cell and gene therapies in the US market and a pipeline of cell and gene therapies progressing toward regulatory review, there is increased focus on establishing commercial manufacturing facilities for these complex biotherapeutics. The workflows of a cell therapy or a gene therapy differ from each other and from those of therapeutic antibodies, so the design and layout of the manufacturing facility must take these workflows into consideration.

“There are multiple considerations to take into account, perhaps most important, though, are capacity utilization at full scale and space efficiency,” says Phil Vanek, general manager, Cell and Gene Strategy, Cytiva. “This means several things, including how the materials and personnel will flow throughout the facility (unidirectional) and how unit operations (individual processing steps) will be combined to build out a complete process.”

Further, the considerations for cell-therapy versus viral-vector manufacturing (for in-vivo gene therapy or as a starting material for ex-vivo gene therapy) can be quite different from each other, adds Jonathan Fortin, global director of Engineering, Lonza. “Viral-vector manufacturing lends itself to a pre-defined manufacturing process flow and equipment design, which leads to greater uniformity in scale-dependent footprint for multiple processes. Cell therapies, on the other hand, often have unique processes that limit the level of flexibility possible in suite and general equipment configurations,” Fortin explains.

He emphasizes that it is necessary to conduct a keen assessment of shared processing areas, taking into account multi-product segregation needs. For example, closed processing steps (e.g., pre-transfection bioreactor stages for viral vector) and lower utilization activities (e.g., final filling followed by product changeover or media preparation) could use shared spaces, driving up efficiency. In addition, material, personnel, and waste flows require special attention for the current design and in support of future expansion needs.

“As a contract development and manufacturing organization, building facilities to accommodate for multiple current and future customers—and, therefore, multiple known and unknown products, processes, and setups—and having a flexible floor plan are critical. We need to be able to accommodate for multiple products and different modalities in different phases, each with the ability to scale up operations to commercial-scale manufacturing in one facility,” Fortin states.

“For product-specific setup areas within the facility, such as dedicated suites, the key aspects come down to the nature and the stage of the product: autologous versus allogeneic, clinical going towards commercial versus commercial. We try to optimize the capital cost for our customers and for us by maximizing the throughput and flexibility of the facility,” he adds.

In addition to current processing needs, Vanek notes that a facility design must be flexible enough to accommodate future changes to any processes. “Tomorrow’s processes may look very different from today’s, so anticipating what will be needed in terms of gases, power, and bench space should be contemplated. And then, finally, a digital solution encompassing electronic batch records, process monitoring, scheduling, and other key process attributes should be designed-in early to add efficiency and control to the process,” he states.

Considering the differences between monoclonal antibody (mAb) production and cell/gene therapy production is also important when establishing a cell/gene therapy facility. Already well-established, mAb production is typically batch-oriented (in this way, making it similar to allogeneic cell therapy production) and characterized by larger single-use bioreactor skids with large downstream chromatography platforms, often segregated into two or more rooms. In mAb production, Chinese hamster ovary cells are the workhorse of the industry, and the process is mostly, if not completely, closed, notes Vanek.

Cell and gene therapies, on the other hand, cover a large number of cell types, are often patient-specific (autologous), and are dependent on equipment made for other industries (e.g., blood processing or protein bioprocessing). Next-generation technologies have to consider the cell types and the batch approach (single per patient or scaled up). Common to each, however, would be design criteria to minimize risk in manufacturing, including unidirectional flow of personnel and materials in the cleanrooms, proximity to a quality control lab for in-process testing, and wholly integrated quality management/electronic batch records to reduce operations errors, states Vanek.

“We have to split this discussion into two parts for a successful comparison: first, viral vectors for gene therapy and second, cell and ex-vivo gene therapy,” remarks Senthil Ramaswamy, head of R&D, Cell & Gene technologies, Lonza. Viral-vector production, he notes, has a number of parallels with mAb manufacturing, especially if using a suspension cell-culture process or an adherent format that has the footprint of a bioreactor rather than dozens of small multilayer cell-culture vessels in incubators. The needed infrastructure is also similar to mAb manufacturing, taking into consideration the unique segregation needs for viral vectors when multiple products are being manufactured in the same facility. “The scales of processing at the moment top out at about 2000 L of cell culture, which is in line with smaller mAb manufacturing processes,” Ramaswamy states.

On the other hand, cell and ex-vivo gene therapy currently have different facility needs for two primary reasons: need for scale-out rather than scale-up in the case of autologous therapies and the highly manual, and often open, nature of processing requiring aseptic processing operations, Ramaswamy explains. “Facilities are commonly grade B cleanrooms with grade A biosafety cabinets (BSC) and incubator banks. These requirements will see a dramatic change as closed automated operations (e.g., Lonza Cocoon technology for autologous or small-scale cell and gene therapy and suspension single-use bioreactors to scale up larger-scale cell therapies) are adopted for these products.”

Another important difference is the high level of tracking and tracing, which is crucial in cell and gene therapies, especially autologous patient therapies, but not relevant to campaign-based batch mAb production. In addition, given that autologous cell therapy products often lead to a single dose for patients with limited treatment options and time, redundancy in manufacturing capability to proactively mitigate against any production disruptions must also be considered. “This is a stark difference from mAb or allogeneic products where a stock-up strategy can offer sufficient mitigation. Necessary, geographical proximity to patients can also drive multiple simultaneous manufacturing sites,” says Ramaswamy.

“A common factor between viral vector and mAb production is that many of the processing steps are/can be standardized and scaled. This makes the design of a commercial facility for such products relatively straightforward, even considering that there is no standard platform yet for viral vectors,” adds Bertus Markies, head of Value Chain Management, Lonza. “As stated by Senthil, the situation is radically different for cell therapy products. For both allogeneic and autologous products, the design of the facility heavily depends on the process. The technology in these fields is still far from mature, and a wide variety is seen in what is used, ranging from differences in equipment, media, and cell-expansion to even small parts such as tubing sets. In essence, these technologies have high potential once they become industrialized.”

Another important factor to consider for a cell and/or gene therapy facility is the equipment and setup. For mAb bioprocessing and viral-vector manufacturing, the equipment needed is similar, such as single-use bioreactors and standard harvest and downstream systems for clarification, tangential flow filtration, chromatography, and sterile filtration, according to Ramaswamy.

Both mAb bioprocessing and viral-vector manufacturing are usually divided into upstream and downstream processes. Upstream focuses on maximizing both the number of cells per bioreactor unit volume (e.g., cells per liter) and then the productivity of the cell upon induction of protein (mAb) or viral particle expression.

“Getting these conditions just right requires balancing the cell line, expression system, media and growth factors, and bioreactor conditions—such as stir rate and gas transfer. For biologics and viral vectors, the cells are a byproduct of production and, thus, often get lysed and discarded in the downstream process, which is designed to optimize both the yield and the purity of the final product,” Vanek explains.

In comparison, cell therapies are different principally because the cell is not a byproduct, but the final product. “Therefore, production strategy is all about preserving the cell phenotype across multiple production steps and scales, meaning that keeping the therapeutic potency (defined individually for every therapy) is paramount, as well as keeping the cells from becoming contaminated by microbes,” states Vanek.

Single-use systems are technologies that are widely used in the bioprocessing and blood processing industries to protect product from contamination, and these systems are also appropriately sized for most cell and gene therapies, says Vanek. Single-use bioreactors that are either flask based or rocking based are widely used, for example, with stirred tank bioreactors being used in certain applications.
Cell collection and washing is mostly by centrifugation (either closed-system centrifugation or a special approach based on elutriation), states Vanek. “Simple filtration is not commonly used; new platforms are popping up claiming to be gentler or simpler, but none have yet been widely adopted,” he adds. “Scalability is key, and few platforms if any can move easily between small volumes (10s of mLs) to large volumes (100s of liters). What’s more, analytical platforms for in-process control and cell characterization are lacking in the cell therapy industry but are being actively pursued.”

It is important to note, however, where customization of single-use technology may be required. “Reliable sourcing and quality standards are key considerations when selecting single-use systems for cell and gene therapy because they are often not designed with these therapies in mind,” points out Ramaswamy. For example, for cell therapy, the cells are the final product received by the patient and are highly dependent upon the process and consumables used. Cell therapy production does not have the numerous purification steps and analytical tests that are standard to mAb production.

To be able to scale up viral vector manufacturing, bioreactors—with 3D spacing rather than a cell-stack setup—are needed with automated downstream processing and product fill. The use of bioreactors would also be needed for allogeneic cell therapy production as well as maximizing automation at commercial scale, according to Ramaswamy. “As we see more products entering commercialization, there is an urgent need to close and automate these processing steps leading to industrialization of cell therapy processes. This will lead to greater standardization in the future,” he adds.