By Qasim A. Rafiq, Fernanda Masri 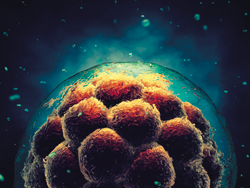 With increasing numbers of advanced therapies—including cell and gene therapies—entering early- and late-stage clinical development, significant focus has been directed toward the development of scalable, robust manufacturing processes. Much of the research and development activity in the sector has addressed the upstream challenges with particular emphasis on large-scale cell expansion; however, equally important is the development of large-scale harvesting and downstream processing operations. This paper presents and summarizes some of the challenges associated with the downstream processing of these advanced therapies and highlights recent advancements in the technologies suitable for such applications.

The unavoidable transition towards an older aging population has become a significant medical challenge faced by many developed and developing economies. The increased demand for hospital and social care, coupled with complex medical interventions, has led to spiralling costs for healthcare systems globally. Advanced therapies, including cell- and gene-based therapies (CGTs), have the potential to address previously unmet patient needs, improve overall healthcare costs, as well as tackle the social and economic effects of chronic and age-related conditions. However, before this potential can be realized, it is crucial that robust, scalable, and cost-effective manufacturing processes are developed. Unlike the traditional manufacture of monoclonal antibodies (mAbs) and other biologics, the production and processing of cellular material forms the basis of the product for CGTs (1). As such, manufacturing processes need to be adapted to ensure that the cellular material retains its functionality and the critical quality attributes (CQAs) are maintained throughout the entire process (2, 3).

As with the production of mAbs, significant research and development for CGT processes has focused on the intensification of upstream production. For example, several studies have investigated the optimization of cell-expansion processes of adherent human cells. Significant progress has been made in recent years with human mesenchymal stem cells (hMSCs) cultured on microcarriers now reaching densities of >1x106 cells mL-1 (4) and human pluripotent stem cells (hPSCs) reaching densities of >2–3x106 cells mL-1 (5). Although R&D activity should continue focusing on improving cell density, the shift of the manufacturing bottlenecks is inevitably leaning towards downstream processing (DSP) (6). The DSP activities for cell therapies are those unit operations and processes that arise after the cellular expansion stage and, depending on the therapy, can include harvesting, washing, cell concentration, formulation, final fill/finish, and preservation.

Despite the fact that most CGT manufacturing processes include a clariﬁcation and concentration step of the cellular material derived from cell culture, DSP remains largely unaddressed. Typically, a swing-bucket rotor centrifugation step or a filtration step is included to remove cell debris, large aggregates, unwanted proteins, volume reduce (i.e., concentrate), and formulate the cellular suspension into a patient-friendly or preservation-friendly buffer (6). In the vast majority of expansion studies, there is little or no mention of the harvest and subsequent DSP of the cells. For anchorage-dependent cells, dissociation into single-cell suspension, while retaining the CQAs, is essential. Current available DSP platforms generally offer either high specificity or high throughput, but rarely both. While highly specific labeling separation systems may be suitable within low volume production (proof-of-principle, small-scale studies, or autologous applications), it is extremely unlikely these will meet the demands in the allogeneic manufacturing environment. Equally, DSP techniques adapted from protein production for CGTs have the capacity to handle the scales required for allogeneic therapies but are hindered by the lack of specificity and sensitivity to the isolation of the cells of interest. As volumes and cell densities increase upstream, and regulatory requirements for target product profiles become more stringent, the need for efficient, highly specific, scalable DSP techniques grows.

The harvesting of cells is the process of removing the cells from the culture vessel after expansion. Given the wide variety of CGTs, an array of culture devices (stirred-tank bioreactors, hollow-fiber/packed-bed reactors, gas-permeable membrane reactors, etc.) are used. Therefore, the harvesting protocol is likely to be process-specific and require optimization in each instance. In most cases, the process is likely to involve the use of an animal-free recombinant enzymatic dissociation reagent (such as recombinant trypsin) and some physical force exerted through an increase in impeller agitation, bioreactor rotation, or increased flow rates depending on the culture vessel employed. For example, the harvesting of cells using anchorage-dependent hMSCs cultured in stirred-tank bioreactors on microcarriers requires a combination of enzymatic dissociation and mechanical force (through impeller agitation) to aid in the successful detachment of cells from the microcarriers in situ (7).

The detachment procedure has been employed successfully for a range of anchorage-dependent cell types in a range of bioreactor systems, and in all cases (Figure 1), the CQAs of the cells were retained (8) despite concerns that the increase in agitation would result in cell-damaging shear forces. This harvesting method has demonstrated that it is possible to increase impeller agitation without compromising quality. This aids in the rate of cell detachment, while ensuring that the Kolmogorov scale remains greater than the size of the cell once it has been detached, making it unlikely to cause cell damage. Such an approach led to greater than 95% harvesting efficiency with the cells demonstrating retention of CQAs, despite a five-fold increase in the impeller agitation (compared with the original culture agitation) and a Kolmogorov scale of approximately 30 µm, larger than the average diameter of the cells (approximately 15 µm) (7). This in-situ detachment procedure should be scalable to larger, industrial-scale bioreactors, having been established on well-understood theoretical mixing principles. Moreover, given the detachment procedure is undertaken in situ, it eliminates the need for an additional processing step outside of the culture vessel, reduces contamination risk, and decreases time between process steps. 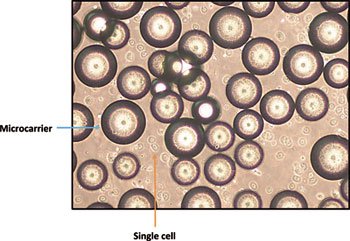 Although the procedure is likely to involve the use of a recombinant dissociation reagent, the harvest of a hollow-fiber or packed-bed bioreactor culture is likely to be different than the aforementioned procedure for stirred-tank bioreactors and may involve extended contact with the dissociation reagent, increased flow rates, and/or rotation of the culture vessel. In all instances of the harvesting procedure, it is important—particularly where mechanical forces are used to dissociate cells—that no additional debris or particulates arise due to the microcarrier/cell-substrate damage. Such an outcome would result in additional burden on the DSP operations to remove such particulates. Some groups have demonstrated successful culture of cells on biodegradable microcarriers (9) to overcome this concern, yet the presence of particulates may still pose a concern for final formulation and patient administration.

Advances in biomaterial formulation have facilitated the development of alternative approaches for cell harvesting, with multiple studies demonstrating the potential to remove the need for enzymatic dissociation reagents and mechanical agitation to facilitate successful harvest. Such approaches include the use of environmentally responsive polymers to coat microcarriers, which enable both the culture of anchorage-dependent cells and the subsequent detachment of the cells through a change in the culture temperature and/or pH (10, 11). Although promising, there is a concern that non-enzymatic methods for cell dissociation will result in the formation of cell sheets rather than a single-cell suspension; this may be inappropriate for applications that require intravenous administration.

Volume reduction, wash, and formulation CGTs to date generally use swing-bucket rotor centrifugation for cell washing and concentration. A biological safety cabinet usually is needed for the subsequent resuspension step, which involves discarding spent medium and resuspending in a suitable buffer. This process may be repeated multiple times to ensure the complete removal of any unwanted reagents and/or particles. However, centrifugation has proven to be a difﬁcult step to automate while maintaining sterility (1) and can pose a problem to achieve the required cell numbers for the manufacture of highly concentrated CGTs (12). Alternatives to swing-bucket rotor centrifugation include continuous counterflow centrifugation systems and filtration systems, which can be more amenable to large-scale, contained and automated operations (6).

Counterflow centrifugation systems, such as kSep (Sartorius Stedim) and Elutra cell separation system (Terumo BCT), can keep the cells in suspension while washing them, clearing out residuals from the supernatant and exchanging the buffer. kSep, in particular, can be fully automated and contained, uses a disposable flow path, is scalable from 0.1 L to >1000 L, and can achieve high cell recoveries (>80%) and high cell viabilities (>90%). The capital investment needed, together with the cost of disposables, demands careful consideration when carrying out process development (6).

Tangential flow filtration (TFF) offers an alternative that can also be scaled, automated, fully contained and, generally, involves a lower capital investment and disposables costs, which may make it more amenable to process development activities (6). For instance, for the anchorage-dependent cells, after the cells are enzymatically dissociated into a single-cell suspension (whether that is detachment from microcarriers, culture surfaces, colonies, or embryoid bodies), these are generally quenched with culture media to preserve cell health by preventing the enzyme from further digesting cell components. More specifically, for the hMSC microcarrier-based expansion outlined previously, cell detachment from the microcarrier is only one aspect of the harvesting procedure. Assuming the microcarriers are not biodegradable and not part of the final product formulation, the next DSP step is likely to be the separation of cells by size-exclusion techniques. For example, dead-end filtration using a vacuum as a driving force was used in the aforementioned hMSCs studies (7, 8). However, this technique, although suitable for the purposes of the study, is not a scalable technique like TFF. Other groups have used TFF and expanded-bed chromatography (EBC) as continuous, integrated alternative techniques for the improved washing and concentration of hMSCs (13, 14). Using TFF and EBC, Cunha and colleagues showed high protein clearance (98%), high recovery of viable hMSCs (70%) with no impact on cell viability (95%) or other CQAs (morphology, immunophenotype, proliferation, adhesion capacity and multipotent differentiation potential) (13, 14). Furthermore, these studies show shorter processing times when using continuous filtration techniques as opposed to discontinuous operations.

Another recent technique that is showing promise for the DSP of CGTs is acoustic filtration (15, 16). Acoustic filtration uses standing waves to capture, separate, and concentrate particles in a fluid without having a physical barrier (membrane or filter) like traditional filtration systems. It is, therefore, considered suitable for shear-sensitive cell lines and potentially allows for higher throughput. It also features fewer clogging issues than traditional membrane-based systems, extending the lifetime of the disposables. 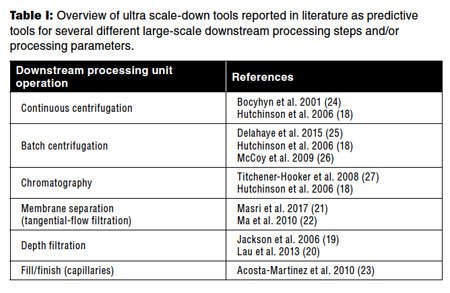 Due to the relative infancy of the CGT DSP space, a large proportion of the research and development activity needs to focus on effective process development and understanding of the critical process parameters (CPPs) at the small scale. The development of bench-scale technologies that better mimic the full scale will be paramount to the rapid development of robust DSP processes and allow cost-effective screening of the susceptibility of cell lines to operating conditions for CGTs (17). To date, some efforts have focused on the development of ultra scale-down (USD) tools to mimic various large-scale operations, such as continuous centrifugation (18), dead-end filtration (19, 20), and membrane separation (21, 22) (Table I). USD devices allow the investigation of several manufacturing hydrodynamic environments (21) and geometries (23) with little material, increasing the throughput of the experimental phase in a cost-effective and time-efﬁcient manner and ultimately, expediting process development of DSP operations.

Delivering effective DSP technologies and robust processes with the capacity to target specificity and throughput is required to ensure that advances in upstream processing are maximized. Effective scale-down models, adequately characterized, may facilitate a thorough understanding of the CPPs and expedite process optimization and parameter screening studies. Moreover, further process understanding and knowledge of the product’s CQAs will be key to develop effective and suitable DSP solutions that have the capacity to scale and are capable of maintaining CGT product quality.

About the Authors
Qasim A. Rafiq, MEng, PhD, CEng, CSci, is associate professor of Cell & Gene Therapy Bioprocessing at the University College London, WC1E 6BT, UK.
Fernanda Masri is an account manager at Sartorius Stedim in the UK.