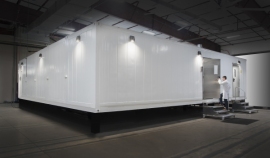 Single-use and modular systems will meet demand for rapid implementation at different scales.

Industry experts have noted that there are limitations in the number of scalable technologies for viral-vector manufacturing and limited expertise in large-scale manufacturing (1). Yet demand is growing, and flexible and efficient facilities will be needed for multi-product clinical and commercial manufacturing.

“In the viral vector space, there is diversity around different vector types (e.g., lentivirus [LV], adenovirus [AV], and adeno-associated virus [AAV]). It’s critical to have a facility design that is flexible enough to adapt to product pipeline diversity,” says Joe Makowiecki, Enterprise Solutions director of business development at Cytiva.

Modular facility designs and modular construction are being used in biologics manufacturing, with a key benefit being faster time from inception to startup. The BioPhorum Group hosted an industry collaboration that proposed a standardized, modular design approach to help advance facility design in the industry (2). While the initial project looked at a monoclonal antibody (mAb) facility, the team plans to extend the concept to cell and gene therapy production.

Cytiva has amassed expertise in modular design and construction with the use of its FlexFactory (a modular end-to-end biomanufacturing platform) as well as its KUBio facility (the FlexFactory inside of a prefabricated facility) for biologics production at facilities around the world. In 2019, the company introduced the KUBio Box—a box-in-box approach, the FlexFactory platform in a modular facility intended to be placed inside a new or repurposed space or shell-building—tailored for viral-vector-based gene therapies (3).

“Speed to market is critical for most, if not all, biologics. This is quite relevant in the gene therapy segment as many gene therapies are qualifying for orphan drug status or fast track designation status, shortening the drug development timeline from seven to 10 years for traditional biologics to three to five years,” says Makowiecki. He says the KUBio box for viral vectors is a current good manufacturing practice (CGMP), biosafety level (BSL) 2 modular facility solution that can be delivered in 10 to 12 months.

Makowiecki says that many new facilities today are designed to use single-use technologies and to produce multiple products, which may require different sizes of equipment. “There is quite a bit of variability when it comes to viral vector manufacturing scales. It depends on the use of the vector (i.e., is it used as a reagent, as in the case of gene modified cell therapies, or is it the end drug product) and the indication (i.e., is it a local injection or a systemic dose). In the viral-vector space, we see process scales from one to 2000 L. There is less variability for lentivirus and gamma retrovirus that is used for virally genetically modified cell therapies (ex-vivo gene therapies); the scale is mostly 50 L and currently doesn’t go beyond 200 L. Whereas for in-vivo gene therapies, using mostly AAV, the scale varies depending on the patient population, disease type, and route of injection, from a few 10 L up to 2000 L. For example, for Duchene muscular dystrophy, the need (at current viral titers and downstream process recoveries) is about 200 L of production bioreactor culture per patient.” The batch size influences the equipment size and number and, thus, the facility design, he notes.

When larger batches are needed, either scale-up or scale-out is used, depending on the type of process. Makowiecki explains that vector production using adherent cells in fixed-bed bioreactors is limited in scale primarily by the size of the fixed-bed bioreactors, and scale-out is used to increase production volume. One option would be to convert to a suspension cell process and stirred tank bioreactors. Another option would be to use adherent cells with microcarriers in stirred-tank bioreactors. Both options typically do not have scale limitations and thus would allow for a more scalable process.

Modular facility speeds clinical research
In December 2019, Cytiva and the University of Massachusetts Medical School (UMMS) announced that they would install a large-scale viral vector manufacturing facility on the school’s Worcester, MA campus to provide large quantities of high-quality AAV vectors for preclinical research. The 3220-ft2 facility will use a good laboratory practice (GLP) viral vector FlexFactory manufacturing platform. Cytiva and UMMS said that the new capacity would help to alleviate the bottleneck of vector supply, as currently researchers potentially wait 12 to 24 months to obtain enough vectors for their research. The facility will be fully operational in 2020 (4).

“Flexibility enables manufacturers to leverage different technologies and systems in our plants, which can be beneficial when working with different manufacturing platforms and different scales,” says Christopher Murphy, vice-president and general manager for Viral Vector Services at Thermo Fisher Scientific, which acquired viral vector manufacturer Brammer Bio in March 2019. The company has been busy expanding, and, in December 2019, it opened a 50,000-ft2 facility in Lexington, MA to provide capacity for the contract development and manufacturing organization (CDMO) to support viral vector development and manufacturing (5). In November 2019, the company completed a $6-million expansion of its gene therapy and viral vector services facility in Alchua, FL that doubled the site’s laboratory and warehousing capacity for upstream process development and quality control testing of gene therapy products (6). “Logistics and warehousing are vital to the success of our operations. We look to leverage centralized warehousing with just-in-time deliveries to our manufacturing plants,” says Murphy.

Murphy says the company’s facilities are engineered to support multiple products and processes, and that it has developed best practices through its recent capacity expansion programs. “Challenges included ‘right-sizing’ manufacturing suites and designing air systems and personnel flows to maintain segregation,” notes Murphy. The facilities use single-use systems. Murphy says the primary benefit for single-use systems is eliminating the need to perform cleaning validation on reused product contact equipment.