The unique structures of fusion proteins lead to expression, heterogeneity, and stability issues. 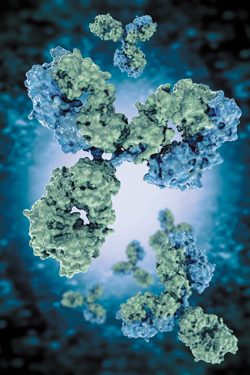 Fusion proteins are engineered proteins that contain domains from different proteins that originate from different sources, such as a cell surface receptor or cytokine (i.e., interferon or interleukin) and an immunoglobulin. “These molecules are of interest because the domains may have functions that, when combined, are uniquely useful as therapeutics, such as binding/inhibition of cytokines and a longer half-life,” explains Steven Chamow, a principal with Chamow & Associates, a biopharmaceutical industry consultancy.

Specifically, two or more proteins are joined in one polypeptide chain, in some cases with a flexible peptide linker connecting the different parts of the fusion protein, according to Paul Carter, senior director and staff scientist of antibody engineering at Genentech.

Combining two different proteins in one molecule can lead to instability, which creates manufacturing challenges during both upstream and downstream processing. Solutions for overcoming these issues are being developed in academia and the pharmaceutical industry by equipment vendors and drug companies alike.

Many proteins have short half-lives in human serum, making them unsuitable as recombinant protein drugs. When constructed as fusion proteins, however, they may become ‘druggable,’ according to Chamow.

A variety of different fusion proteins have been evaluated in clinical trials and several products are on the market. Amgen’s Enbrel (etanercept) for the treatment of moderate to severe plaque psoriasis, rheumatoid arthritis, and other diseases, is one example. This TNFα blocker consists of a tumor necrosis factor receptor (TNFR) and an immunoglobulin (Ig) G1 Fc segment. The TNFR provides specificity and the Fc segment increases the stability.

In fact, the most successful fusion proteins to date have been so-called Fc fusion proteins, according to Carter. “These fusion proteins include an Fc region, are taken from an IgG, that extends the serum half-life of the fusion partner, facilitates expression, and allows purification by protein A affinity chromatography,” he says. The Fc region also provides the option for incorporating secondary immune functions in the fusion protein.

Fusion proteins are produced using genetic engineering by joining two or more genes that code for different protein components. In some cases, the full protein sequence is included, and in others only a portion. The fusion gene often encodes a peptide linker between the protein domains to allow the domains to fold correctly.

The need for stabilization

Achieving and maintaining proper folding for each of the components in fusion proteins is a major challenge in the molecular design of these products. “Issues can arise when domains are taken out of their natural context, or a domain is combined with a second domain with which it does not fold well,” Chamow observes. As a result, combining the different components of the fusion protein that do not naturally occur together can lead to instability with the composite molecule, creating manufacturing challenges such as aggregation during the cell culture or purification steps, according to Matt Kalo, associate director of the protein analytical chemistry department at Genentech.

For example, the low-pH elution step used in the initial protein Acapture step may induce large amounts of aggregation, impacting product quality and yields. “Frequently, routine cell-culture and purification steps will need to be modified to address the tendency to form aggregates more easily,” notes Kalo.

Some fusion proteins are also prone to proteolytic degradation during production and/or after therapeutic administration, according to Carter. This issue can sometimes be overcome by modifying the junction sequence between the fusion protein domains. Kalo adds that modifying the junction sequence--either by moving it to a different location of the protein or by changing its length--may also alleviate incomplete disulfide bridging or disulfide scrambling. Development of a custom formulation may also be needed to minimize aggregation over time to enable long-term storage.

It is important to note, according to Kalo, that the design of fusion proteins can create novel epitopes, and thus the immunogenicity potential needs to be assessed to avoid any undesired strong hypersensitivity or an immune response.

“Overall,” he adds, “a fusion protein will often have liabilities that will need to be addressed by more process development than would be typically needed for monoclonal antibodies (mABs), which are typically much better behaved from a processing standpoint.”

In addition to stability issues, other manufacturing challenges have been encountered with fusion proteins, including low expression titers, and incomplete and heterogeneous glycosylation, according to Carter. The titers for fusion proteins are generally lower than those for mAbs due to less efficient translation, notes Chamow.

Non-human glycans—such as N-glycolylneuraminic acid and alpha-galactose—are also a concern with certain expression systems and may lead to immunogenic responses, according to Kalo. “In particular, the level of N-acetylneuraminic acid or sialylation, which can impact plasma half-life and the potency of the candidate, is a key quality attribute and can be challenging to control within a desired specification,” he says.

To address this issue, it is necessary to identify suitable levers in the cell-culture process that consistently generate the proper level of sialylation, according to Kalo. Different feed strategies are often used, such as the addition of galactose. Other approaches have also been employed to attain the desired level of sialylation, such as temperature and pH shifts.

Finally, Chamow adds that Protein A capture chromatography can present problems for fusion proteins, not only with respect to their acid stability, but also in terms of lower binding capacities due to their larger size. He does note, however, that for other downstream operations, wider options for polishing chromatography steps to remove aggregates and viral inactivation methods that don’t require low pH treatment are now available. Improved linker sequences are also being developed that can modulate domain interactions and enhance domain stability, according to Chamow. He also expects that new technologies for cell-expression and processing methods, such as CRISPR/Cas9-based expression for cell lines, the implementation of ultraviolet C (UVc) radiation for inactivation of viruses at process scale, and continuous bioprocessing will be beneficial for fusion protein manufacturing.

While fusion proteins are a growing segment of the biologics market, manufacturing gaps do remain that must be addressed. Specific concerns for Chamow, as outlined previously, include increasing the productivity of processes, ensuring product stability, and minimizing immunogenicity.

Technologies are being developed to address these gaps, but Kalo would like to see an advance in up-front design innovation rather than technology advances across the various unit operations. “A key aspect of improving the manufacturability of fusion proteins lies with their design, which should be focused on minimizing the subsequent residual liabilities that remain for process development. Prospective molecular assessment and adjustments to the candidate earlier in the process by incorporating previous learnings and new discoveries obtained from rigorous assessment of candidates will permit faster and easier development of fusion proteins as drugs,” he asserts.

Chamow points out that more attention is being given to using in-silico design to ensure that fusion protein domains fold together well and are compatible. Kalo also believes that more time must be invested in identifying the underlying reasons for the manufacturability challenges, some of which are common across fusion proteins as a class, while others vary from candidate to candidate.

“Development of fusion proteins requires a more flexible mindset and less reliance on standard approaches, which are often exhausted first before the underlying reasons are thoroughly investigated. It is the latter efforts that often lead to a more sustainable and permanent solution for a candidate,” Kalo states. In practical terms, therefore, he notes that perhaps more investment in structure/function relationship studies should be pursued earlier in the development cycle than a standard mAb drug development strategy would encourage.