This Application note describes high-throughput process development with PreDictor™ plates and Assist software to develop the intermediate purification step of insulin derived from E. coli. This revealed the ion exchanger Capto™ SP ImpRes to be the most promising medium (resin) and identified binding and elution conditions that gave good separation of insulin from truncated forms of insulin. Further column studies using 1 mL Tricorn™ columns and ÄKTA™ avant 25 chromatography system confirmed that the developed conditions were robust. Finally, the method was scaled up, first 40-fold and then 400-fold, with both purity and recovery exceeding 90%. This figure is a good basis for achieving the required purity (98% or more) in a following polishing step not described here.

Introduction
The ever-increasing need for higher throughput in process development has led to the introduction of new high-throughput process development (HTPD) tools. In purification development workflows, such HTPD methods have led to significant efficiency gains seen as a reduction in both the time and amount of sample required for selecting chromatographic media and establishing running conditions.

An automated chromatography system such as AKTA avant 25 will provide both buffer preparation and Design of Experiments (DoE) functionality to simplify this task. The same system can also be used for initial scale-up to pilot scale in, for example, HiScale™ 16/40 columns. Further scale-up can be performed on AKTA avant 150 system and columns from the AxiChrom™ range.


This Application note describes a complete workflow from PreDictor plate screening to a 400 mL column volume process for the intermediate purification of insulin on the Capto SP ImpRes ion exchanger. This intermediate purification is the second chromatography step that follows the initial capture of pro-insulin using Capto MMC (a multimodal cation exchanger) described in an earlier Application note (1). Note that several unit operations take place between these two steps, including enzymatic cleavage (Fig 1) of the pro-insulin to form insulin.These operations are not described here. 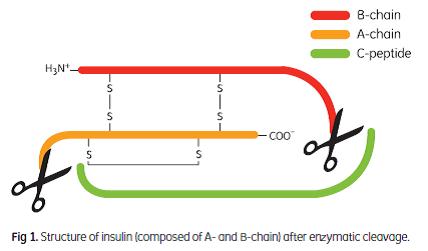 Materials and methods
PreDictor screening experiments for binding/elution
Whenever possible, the PreDictor plate screening experiments were performed with fully automated protocols using a Tecan™ Freedom EVO™-2 200 Robotic System. Otherwise, manual protocols were used. Liquid removal was by vacuum or centrifugation throughout the study. The sample used in all experiments was generated by enzymatic cleavage of lyophilized pro-insulin obtained from BIOMM S.A., Belo Horizonte, Brazil. Detailed procedures of how to perform the screening experiments can be found in the high-throughput process development handbook (2).

Assist software was used to support the PreDictor workflow from setting-up the experimental design to evaluating the plate data. MODDE™ software was also used for some optimization work.
Analysis of experiments

All insulin samples of interest were analyzed on an AKTAmicro™ system using an analytical RPC method based on a phosphate/perchlorate (pH 2.5) system with acetonitrile as organic modifier. The column used was a Kromasil™ 100-3.5 C4; 150 × 4.6 mm. Figure 2 shows a typical chromatogram of a start sample where insulin and its main impurities are monitored. 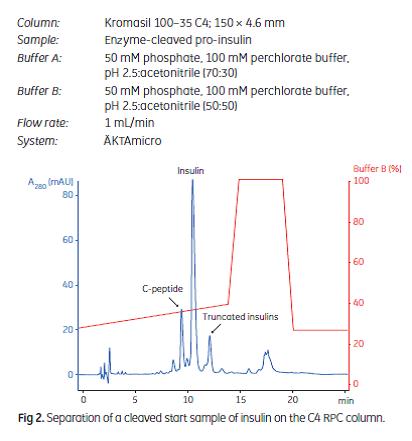 The resulting insulin concentration in the flowthrough fraction (i.e. the fraction collected after binding) or the first elution fraction for each condition was used as input data for Assist software, which generated extrapolated response surfaces for the experimental evaluation.  Chromatograms were evaluated as follows:

Column experiments
Tricorn 5/50 columns (1 mL) were used for most small-scale studies such as the optimization and robustness studies. The columns were packed according to the instructions for the individual medium. HiScale 16/40 column was packed to bed height of 20 cm. AxiChrom 50/300 was packed to a bed height of 20.5 cm using predefined Intelligent Packing methods in UNICORN™ 6.1 software (3, 4). Column efficiencies were tested with 1% acetone in 20% ethanol.

All column experiments, comprising those used in the screening,optimization, robustness studies, and scale up, were performed on chromatography systems suitable for the column dimensions. The systems used for the development work were AKTA avant 25 and AKTA avant 150, while AKTAmicro was used for analyses.

Results
Binding experiments in PreDictor plates
Insulin is a small, relatively hydrophobic peptide with a limited solubility close to its pI. An earlier solubility investigation had revealed the possibility of using pH ≤ 4 for binding. As pH 4 is the pH used to terminate the enzymatic cleavage of pro-insulin to insulin in the preceding step, it was decided not to adjust pH further. The two factors investigated in the binding experiments were NaCl and ethanol concentrations. An organic solvent is needed to improve chromatographic performance of insulin. Initially, three candidate media were screened: Capto S, SP Sepharose™ Fast Flow, and Capto MMC. Figure 3 shows that all three bound insulin in ethanol. Capto S and SP Sepharose Fast Flow both bound at low NaCl concentration, while Capto MMC appeared to have higher binding at elevated levels.

At this stage in the process development work, a new ion exchange medium (Capto SP ImpRes) was commercialized. Capto SP ImpRes is a high-flow agarose medium with a smaller particle size than SP Sepharose Fast Flow (approx. 40 vs 90 μm) but has almost identical pressure-flow properties. Its binding properties were investigated and the result was very similar to that of SP Sepharose Fast Flow.

Based on the binding experiments, all media except Capto MMC were considered for further studies, although based on particle size, the Capto SP ImpRes was assumed to have higher peak resolving capability. Further results from Capto S are not shown here as the initial column studies showed less promising results.


The binding conditions chosen for all the following experiments were 10% (v/v) ethanol without addition of NaCl and no further adjustment of pH.

Elution experiments in PreDictor plates
The pH used in the binding experiments (pH 4) was maintained in the elution study. Its purpose was to find promising elution conditions for insulin and to study selectivity during elution, that is, identify conditions that separated insulin from truncated insulins as well as from pro-insulin. Ethanol and NaCl concentration in the elution step were the two factors varied.

Insulin was loaded to about 80% of the binding capacity found in the binding experiment after adding 10% (v/v) ethanol to the sample. Ethanol in the elution was varied between 30% and 50% and the NaCl concentration between 100 and 450 mM NaCl. Yield in the two first fractions and purity in the first elution fraction were determined and results are visualized in Figure 4.

The blue area of each media indicates more than 80% yield after two elution fractions. After the first elution, the maximum purity that was achieved with SP Sepharose Fast Flow was just above 70% (shown as red shaded area). This purity was also found in the fractions from Capto SP ImpRes, but at lower NaCl concentrations. 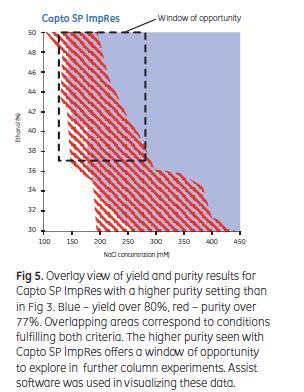 could be obtained at relatively low NaCl concentrations while still maintaining a yield of 80% in the two first elution fractions. Analyzing all fractions also revealed that the C-peptide (the most abundant impurity) needs high NaCl concentration to elute, while the truncated insulins eluted at the same conditions as for insulin (or conditions close to these).

The above results show that the column chromatography study should be performed at an ethanol concentration in the range of 40 and 50% and at salt concentrations between 150 and 250 mM NaCl.

Column optimization studies using the DoE module in ÄKTA avant 25
The study to optimize elution from Capto SP ImpRes was performed in small columns (Tricorn 5/50) using AKTA avant 25 system with a built-in DoE module in UNICORN software. Loading was performed at pH 4 in 10% (v/v) ethanol. Insulin was loaded at 20 mg/mL medium, well below the dynamic binding capacity in order to stay under the limit where fibril formation of insulin could be a risk (5). 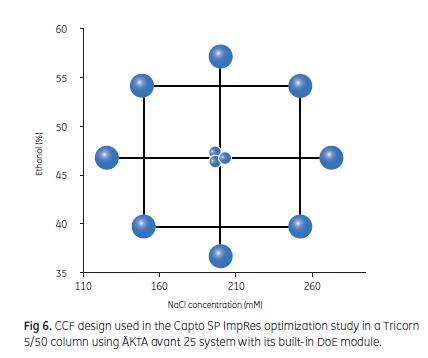 The conditions shown were used for the first elution step, which was followed by a second step at 1 M NaCl and 50% ethanol in 50 mM sodium acetate buffer pH 4.0. This second step was used to elute the C-peptide. The more difficult separation of insulin from its truncated forms was achieved isocratically in the first elution. Good statistical models for the results were obtained using retention volume as response (see Fig 7 for the Capto SP ImpRes models). 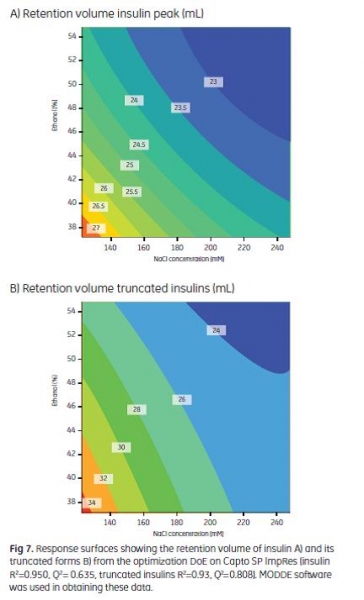 To visualize the conditions giving good separation, a sweetspot analysis was performed on the optimization study results (see green area in Fig 8). An operating space, that is, the largest difference in elution volume between the insulin peak and the truncated insulin peak, was identified. Within this space, the condition with the lowest addition of NaCl and a moderate ethanol concentration was selected for further evaluation. 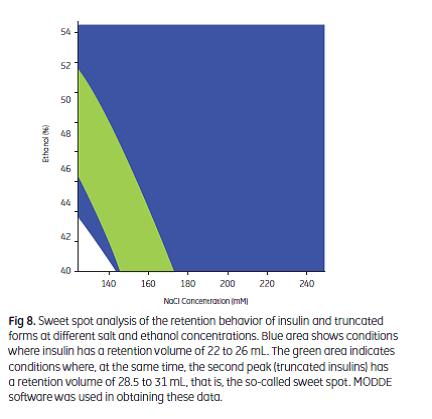 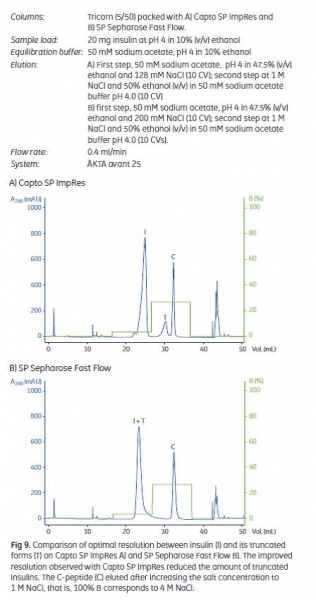 Column robustness studies using the DoE module in ÄKTA avant 25
The Capto ImpRes robustness study was performed in Tricorn 5/50 by varying sample volume, NaCl, and ethanol concentration, which is visualized by the three-dimensional space as shown in Figure 10. Table 2 shows conditions for the center-point and ranges in the chromatographic runs. All conditions investigated showed similar results, that is the variation in purity, insulin, and truncated insulins were of the same magnitude as the replicates in the center point (Fig 10). Insulin purity varied between 90 and 92% and content of truncated insulins between 2.4 and 2.8%. In all cases, the achieved yield was close to 95%. A separate study using three different lots of Capto SP ImpRes, run at the centerpoint, also gave a robust result. 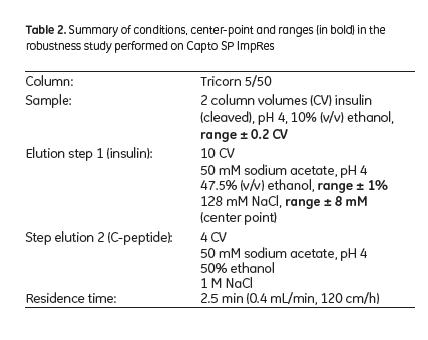 Scaling up
Column bed height was increased to 20 cm and was kept during further scale-up to larger column diameters. The columns were HiScale 16/40 (16 mm diameter) and AxiChrom 50/300 (50 mm diameter) packed with Capto SP ImpRes, which gave respective media volumes of 40 mL and 400 mL.


The columns were equilibrated with 50 mM sodium acetate, pH 4 containing 47.5% ethanol, but the feed sample contained only 10% (v/v) ethanol. Elution was performed with 50 mM sodium acetate, pH 4 containing 47.5% ethanol and 130 mM NaCl. The sample load was kept constant during scale-up but in order to keep linear flow rate at 120 cm/h, residence time was, increased from 2.5 min to 10 min. Fractions from the flowthrough and eluted peaks were analyzed on the RPC column.

Figure 11 and Table 3 show the scale-up results and purity data for each column diameter. Both demonstrate that the intermediate step for insulin purification was scaled up successfully from a 1 mL Tricorn 5/50 Capto SP ImpRes column via 40 mL HiScale 16/40 up to a 400 mL AxiChrom 50 column run on AKTA avant 150 system. Using this scale-up approach, purity of the target protein exceeded 92% and yield was greater than 95%.

Conclusions
High-throughput screening with PreDictor plates and Assist software enabled quick selection of two potential chromatography media and identified promising binding and elution conditions for the intermediate purification of recombinant insulin expressed in E. coli. This gave a fast and confident start to process development for this chromatographic step.

When the optimized protocol was also confirmed to be robust, the process was successfully scaled up from a 1 mL Tricorn 5/50 column to a 400 mL AxiChrom 50 column. The resulting purity for this production-scale intermediate purification step was in excess of 90% and the yield was 98% or more. This purity was increased further in a following polishing step (not described here) and the desired final purity of 98% was therefore easily achieved. The lower content of truncated forms of insulin achieved in the intermediate purification of this study would benefit the final polishing step by reducing the purification burden placed on it.

The overall outcome of this study demonstrates the value of introducing high-throughput methods into process development workflows.