Introduction
Inoculum propagation in animal cell culture is typically done in a series of batch cultures with increasing cultivation volume until a sufficient cell number is obtained for seeding of the final production reactor. The maximum cell concentration achieved in these pre-cultures limits the split ratio and requires the use of several bioreactors in the seed train. Typically, sequential expansion steps with split ratios of 1:5 to 1:10 are used. In perfusion culture substantially higher cell concentrations are reached. Therefore, higher dilutions are possible and the number of expansion steps can be reduced.

Disposable bioreactors are increasingly used for cell cultivation because they improve process flexibility, shorten turnover times, and eliminate the  equirement for cleaning and sterilization. Numerous animal cell lines such as CHO, HEK, NS0, S2 and SF9 have been cultivated successfully in WAVE Bioreactor systems, demonstrating the flexibility of this device (1–5).

In this study cells were expanded in single-use reactors using the WAVE Bioreactor system equipped with an automated control for perfusion culture. A schematic drawing of the reactor is shown in Figure 1. 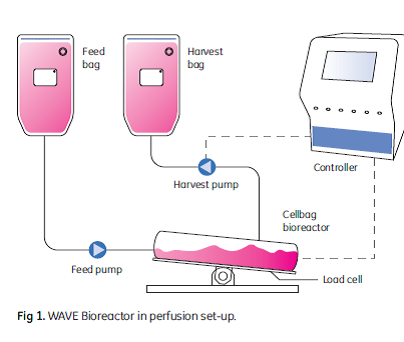 The cells are grown in a pre-sterilized, inflated cultivation chamber, a Cellbag bioreactor. The culture is mixed by rocking the bag attached to the rocker tray. Heating occurs via a heater pad located below the tray and gas supply is provided via the headspace that can be filled with a mixture of ambient air and CO2, to support high cell concentration also additional O2 can be blended in. The reactor is equipped with probes for measurement of dissolved oxygen (DO) and pH. The parameters are controlled by a WAVEPOD™ II process control unit. In perfusion mode the cells are retained inside the reactor by an integrated filter with a nominal pore size of 7 μm that floats on the culture surface. Agitation causes lateral movement of the filter, which delays cell attachment and prolongs filter lifetime. The perfusion rate is controlled via an integrated load cell that ensures periodic addition and removal of equal amounts of feed and harvest. The setup for perfusion culture is shown in Figure 1. Cell retention via the integrated filter eliminates the need for an external recirculation loop and cultivations can be performed in preconfigured Cellbag bioreactors, available
for working volumes from 1 to 25 liters.

Cell line and cultivation medium
CHO-S cells (Invitrogen) were used in this study. The cells were grown in serum-free medium (T13, Shanghai Hankang Biotech Co.). For fed-batch cultivations a nutrient concentrate (T13-F) from the same manufacturer was used.

All cultivations were performed in WAVE Bioreactor 20/50 system EHT. For batch and fed-batch cultivations Cellbag 10L at a working volume of 4 liters were used. Perfusion culture was performed in a Cellbag 2L at a working volume of 1 liter. Culture conditions were controlled by a WAVEPOD II controller. Set points were 7.10 for pH and 40% air saturation for DO. Oxygen was provided via headspace aeration using ambient air at a flow rate of 0.2 liters per minute (Lpm). Agitation settings of 25 rpm and 6° were used for all cultures.

Cultures were monitored by daily cell count and viability determination in a hemocytometer using the trypan blue exclusion method. Additionally, glucose and lactate concentrations were measured using an enzymatic bioanalyzer (SBA–40C, Shandong Academy of Sciences, China). Feed additions and perfusion rate were adjusted daily to keep the residual glucose concentration higher than 0.5 g/L. Inoculum from batch and perfusion cultures was removed at the end of the exponential growth phase while they were still growing at maximum rate. Both cultures were continued afterwards to investigate cell growth and maximum cell concentrations. In perfusion culture the medium exchange was 1.5 culture volumes per day when the inoculum was removed for the subsequent fed-batch. During the following two days, until termination of the culture, perfusion was increased to a maximum of 3.7 culture volumes per day.

The fed-batch cultures, inoculated from batch and perfusion culture, were terminated at 60% viability.

Results and Discussion
Inoculum propagation
CHO-S cells were grown in either batch or perfusion culture to generate inocula for subsequent fed-batch cultivations. During the initial phase cell growth in both cultures was similar (Fig 2). However, despite high cell viability, the growth rate in the batch culture decreased from 0.8 × d-1 during the first two days to about 0.3 × d-1 between days 2 and 6. Medium exchange in the perfusion culture was started on day 2. The nutrient supply supported an average growth rate of 0.8 × d-1 until day 5, as shown by the constant slope of the growth curve in Figure 2. Inoculum was removed from each seed culture while the cells were still growing at their
maximum rate and while viability was higher than 95%. 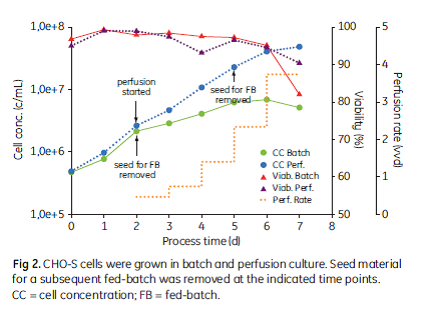 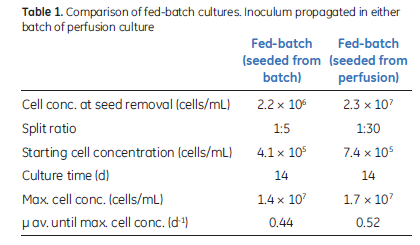 The higher split ratio in perfusion culture saves at least one step in the inoculum propagation as compared to batch mode for which two subsequent cultures with a split ratio of 1:5 would be required to obtain a similar ratio. Even higher split ratios can be achieved when a slight reduction  of the growth rate from 0.8 to 0.6 × d-1 is accepted. Although the cells were no longer in exponential growth phase, the viability still was 96% at a cell concentration of 4.06 × 107 cells/mL on day 6 (Fig 2). Seeding at a cell concentration of 4 × 105 cells/mL would allow a split ratio of 1:100. 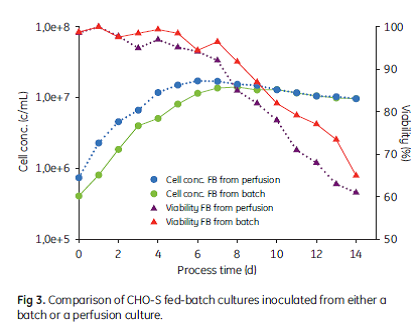 Figure 3 shows that the culture seeded at an 80% higher inoculum concentration reached the maximum cell concentration about 2 days earlier. Additionally also the viable cell integral was increased by about 20% (data not shown). Assuming constant product formation during cell growth, this would allow to also reach the same amount of product two days earlier and thus shorten process time in the main bioreactor.

Based on the results from this study, propagation of inoculum in a perfusion culture can be used to achieve an at least 5 to 10-fold higher split ratio compared with traditional cell expansion in batch cultures. This in turn offers the possibility to reduce the number of steps in a seed train and consequently also the investment cost for bioreactors. Single-use bioreactors reduce turnover times and improve process flexibility. The maximum culture volume of the WAVE Bioreactor 20/50 system is 25 liters.

Run in perfusion mode, the reactor can directly provide inoculum for working volumes up to 1000 liters. An example of seed-train expansion in batch versus perfusion culture is shown in Figure 4. Furthermore perfusion cultures could also be used to seed production reactors at higher cell concentrations, thereby shortening process time in these reactors and improving facility throughput. 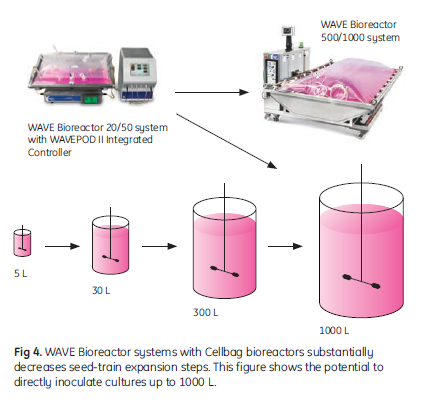