Advances in technology are increasing the productivity and efficiency of commercial-scale chromatography bioprocesses. 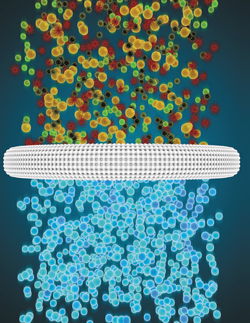 Chromatography is a crucial step in the purification of biopharmaceuticals and accounts for a significant portion of downstream processing efforts (time and cost) for biologic drug substances. There is, therefore, constant pressure to improve productivity and efficiency. Advances are being made on several fronts to reduce the time and cost associated with large-scale chromatography. The development of new resin chemistries including enhancements to Protein A for monoclonal antibody (mAb) capture, increasing use of automation, implementation of single-use technologies, and exploration of the potential for continuous chromatography at commercial scale are all impacting the development of large-scale chromatography processes.

Thermo Fisher has introduced a new platform technology with large-scale production capability based on affinity chromatography resins that address challenges in the purification of mAbs, antibody fragments, and blood factors, as well as viral vaccine and gene-therapy vectors, according to Paul Lynch, senior product manager for Thermo Fisher Scientific. “This platform enables products to be developed and launched for broad commercial use or customized and developed for specific molecules classes,” he says. The new affinity resins work for new antibody types, smaller antibody fragments, and fusion proteins where Protein A chromatography will not because they bind other portions of IgGs. “Affinity resins are a powerful tool for capture chromatography due to the high degree of purity obtained after a single processing step,” Lynch states.

Ljungqvist adds that for antibody fragments in particular, these new types of resins on the market today are “enabling a platform approach similar to what has been successful and beneficial for mAb processes using Protein A chromatography.”

While Protein A continues to be the workhorse for capture chromatography for standard mAbs, improvement of the performance of Protein A resins has also been a focus given the high cost of this purification step. “Recent chromatography developments have mostly focused on expanding the boundaries of capacity, especially in the area of Protein A resins, where few very high-capacity products exist. Capacity in a capture step such as Protein A is critical in reducing cost and increasing the ease of use through reductions in column size, buffer usage, and overall footprint of the unit operation,” observes Lynch.

In principle, according to Ljungqvist, it is possible to purify mAbs using any chromatographic technique, but it is difficult to achieve a similar purity, robustness, and as high a yield as generally observed with Protein A under generic conditions. “Protein A enables a platform process for mAbs, thus enabling higher throughput of projects through process development and manufacturing,” she says.

Alternatives to Protein A chromatography are available based on techniques such as precipitation, ion exchangers, and multimodals/mimetics. “It is challenging to compete on selectivity with the years of evolution that have resulted in current Protein A resins, which provide greater than 95% yield and purity with minimal process development required. More than 40 years of improvement in Protein A chromatography has resulted in well-established, robust purification processes for monoclonal antibodies,” Ljungqvist concludes.

Specifically, multimodal resins and mimetics (synthetic molecules or smaller peptides that mimic the structure or the function of the Protein A ligand) have so far been unable to offer significant improvements over Protein A and often lack the capacity Protein A resins can offer. Instead, Ljungqvist points to incremental improvements in the Protein A ligand and resulting Protein A chromatography resins, and further improvements in this area can be expected. For example, GE Healthcare is currently using high-throughput screening techniques to screen hundreds of ligand designs with the goal of further improving process economy and robustness in mAb manufacturing processes by increasing the dynamic binding capacity and alkali stability of Protein A resins.

For other chromatography steps, the introduction of mixed-mode chemistries over the past few years has provided the chromatographer with added purification tools for process-scale chromatography, according to Peter Levison, senior marketing director for downstream processing with Pall Life Sciences. These resins contain simple multimodal ligands with functional groups that interact with the target protein in multiples, including ionic interactions, hydrophobic interactions, hydrogen bonding, etc.

“These sorbents with either acidic or basic functional groups and differing hydrophobic moieties enable mixed-mode interactions between the sorbent and the components of the feed stream,” he explains. Pall recently introduced a cation-exchange mixed mode sorbent that is effective in post-Protein A mAb polishing when used in conjunction with membrane chromatography in the flow-through mode.

GE Healthcare has taken the multimodal concept beyond the structure and function of the ligand to design a chromatography resin with a non-functionalized outer layer (without ligand) and a functionalized core with an attached ligand. This approach combines properties of size-exclusion and adsorption chromatography, according to Ljungqvist. She notes that the new resin has been found particularly suitable for vaccine processes; small proteins and contaminants enter the shell and bind to the multimodal ligand in the core, while the larger target viruses are collected in the flow through.

Developments are also being made in ion-exchange chromatography, primarily in the area of capacity improvements to reduce cost and improve ease of use, according to Lynch. Thermo Fisher has continued to advance both the capacity and resolution performance of its ion exchange portfolio with the launch of two next-generation resins. Lynch stresses, however, that although capacity is an important feature, the capability of a resin to separate the molecule of interest from the other contaminants and impurities is the most important factor in increasing both yield and purity. “Our focus continues to be on finding ways of delivering higher resolution products while maintaining the capacity targets needed for effective purification of biomolecules,” he asserts.

Automation of an entire large-scale chromatography process has the potential to create a closed setup that enables “push button” automation of all chromatography unit operations, including clean-in-place (CIP), packing, run, and unpacking steps. The aim, according to Ljungqvist, is to minimize errors and maximize process efficiency and uptime, repeatability, and process replication.

“An automation platform that consolidates process data also allows operators to spend time on more productive tasks, like process analysis, exception handling, and compliance support,” Ljungqvist says. By providing a single platform to connect data, technology transfer and scale-up from process development to final manufacturing scale are also simplified. “The benefits can be even greater when data on raw production materials from different suppliers can be consolidated and used as an integral part of a business’ information management structure,” she adds.

LCAs provide a holistic perspective of the entire value chain from cradle to grave and a wide variety of environmental-impact categories, not just carbon footprint, according to Ljungqvist. “Initially, many people in the industry expected disposables to be less environmentally sound than traditional technologies, but our studies have revealed the opposite,” she observes. Most notably, significant reductions in the use of energy, water for injection (WFI), process water, clean steam, and cleaning chemicals are major drivers in favor of single-use technologies.

Along with single-use technologies, continuous processing is also recognized by many in the industry as important to meet the need for more flexible, efficient manufacturing of biologic drug substances. In the immediate future, downstream bioprocessing will likely involve hybrid solutions with both single-use and stainless-steel equipment and limited linkage of unit operations.

While there are no approved downstream processes using continuous chromatography yet reported, according to Ljungqvist straight-through processing (STP), in which two or more chromatography steps are connected in series with in-line adjustment of process conditions between columns to ensure optimized loading conditions during the next step, is being evaluated at large scale and could be seen as a step toward continuous downstream processing.

Equipment suppliers have also introduced or are developing continuous chromatography systems for use at the lab, pilot, and manufacturing scales. Both GE Healthcare and Pall have systems based on countercurrent processing and are collaborating with customers to demonstrate the scalability of their technologies.

Developments from GE Healthcare include the introduction of dynamic control to adjust for variations in binding capacity of the chromatography resin or for changes in feed composition and improved ultraviolet capabilities to handle feed streams with high titers and/or backgrounds. The company has also recently introduced a new periodic counter-current chromatography resin with high binding capacity at short residence times, making it suitable for continuous chromatography, according to Ljungqvist.

Pall’s continuous chromatography solution differs from others on the market because its valve cassette is single-use, simplifying set up and cleaning operations. The commercial-scale unit has up to eight chromatography columns in the single-use flow path and the ability to purify target biomolecules from bioreactors up to 2000 L in size within a 24-hour operating window, according to Levison. “The number of columns required and process times are very much influenced by product stability and titer, but the flexibility offered with up to eight columns should enable the most challenging chromatographic steps to be achieved in a continuous manner during process development through pilot to clinical manufacture and beyond,” he asserts.

For Lynch, the most recent advance in continuous chromatography has been the introduction of simulated moving bed chromatography for continuous operations. “Although this process has been used at industrial scale for other markets, the biopharmaceutical sector has struggled to implement the technology for a variety of regulatory reasons and due to its complexity,” he notes.

A number of technologies have been introduced to help address the challenges associated with the preparation and storage of the large volumes of different buffers required for commercial-scale chromatography. In-line dilution (ILD) is one method. With ILD, floor space is reduced due to the use of buffer concentrates that are diluted with WFI-grade water as needed.

There are issues with this approach, however, according to Ljungqvist. First, one buffer concentrate can be used to produce only one final buffer. Second, because buffers are multi-component formulations, the common ion effect (CIE) limits the concentration grade when preparing stock solutions. In addition, the subsequent dilution may cause pH and conductivity shifts that need to be taken into consideration in the final buffer formulation. Third, she stresses that ILD does not allow dynamic control and mass balance is not taken into account; concentrated buffers need to be precisely formulated as dilution will propagate any formulation error, and managing gradients is not possible with ILD.

Inline conditioning (IC) is an alternative technique designed to overcome buffer challenges that involves in-line preparation of buffers from concentrated, single-component stock solutions of acid, base, salt, and WFI. “Because IC uses single-component solutions, one single stock solution can be used to produce several buffers of different concentration, pH, or conductivity, and higher concentrations can be achieved because the CIE is less of a limiting factor,” Ljungqvist remarks. She adds that GE Healthcare’s IC skid requires less space than ILD and also addresses issues with buffer variability by allowing for feedback control of the buffer preparation process. “Dynamic control carefully monitors effects of ion activity as well as concentrations in stock solutions and the final buffer so that buffer variability can be compensated for in line through adjustment of relative volumes to ensure quality control of the final buffer formulation.”

Pall, meanwhile, has developed an in-line concentration technology based on patented single-pass tangential flow filtration technology that when used directly upstream of a chromatography step has been shown to significantly increase the dynamic binding capacity of the capture sorbent, which has a positive impact on process economics, according to Levison. “These benefits are magnified by moving from batch to continuous chromatography due to the increase in the operating capacity of the sorbent through capture of the column breakthrough on subsequent columns, enabling maximal binding of the primary capture column,” he comments.