Understanding opportunities and challenges across all major phases of development.

Biosimilars are one of the fastest-growing development opportunities in biopharmaceuticals. A Datamonitor study estimates 2009 sales of biosimilar products in the United States and five leading European markets at $150 million. In 2015, when 32 biologics enjoying annual sales of $51 billion will have lost patent protection, biosimilar sales are expected to reach $3.7 billion (1). Unlike with generic small-molecule drugs, however, creating an exact copy of a therapeutic protein is impossible. Regulatory agencies, therefore, evaluate biosimilars based on their degree of chemical and therapeutic similarity to innovator biologics.

The depth and breadth of testing required to demonstrate similarity that meet regulators' expectations, some of which are still evolving, depends on the degree to which sponsors collect and validate comparability data during development. Those who create a compelling case will likely experience a lower regulatory burden.

The 2009 Biologics Price Competition and Innovation (BPCI) Act authorized the US FDA to devise an approval pathway for biosimilar products. FDA's February 2012 draft guidance document, Scientific Considerations in Demonstrating Biosimilarity to a Reference Product, defines biosimilars as molecules that are "highly similar" to a reference product, with "no clinically meaningful differences" (2).

The draft document warns of significant differences between approval mechanisms for small molecule and biologic follow-on products, specifically that a one-size-fits-all pathway would not be possible. FDA says it will instead "consider the totality of the evidence" when assessing follow-on products (2).

Specifically, FDA will consider the product's complexity, formulation, stability, and analytics, and then apply a risk-based approach relying heavily on pharmacovigilance. The draft FDA guidance is modeled on the European Medicines Agency (EMA) 2004 biosimilars guidance document, which is currently undergoing an update (3). In general, FDA and EMA biosimilars guidance documents are considered to be consistent with each other. The main difference between the two agencies' perspectives on biosimilars is tied to the issue of "interchangability." FDA has the authority to designate interchangability while EMA leaves this designation to national regulators. There are additional minor differences in the guidance documents. However, because the FDA guidance document is still in draft form and the EMA document is undergoing a revision, it is safe to say that both regions' regulations are evolving in this area.

Economic and market differences between biosimilars and generic drugs will be striking in the years ahead, according to a Federal Trade Commission assessment, as follows:

>Competition between innovator drugs and biosimilars will more closely resemble brand-to-brand competition than brand-to-generic competition.
>Discounts for biosimilars will be modest, in the 10%–30% range, versus up to 90% for small-molecule generic drugs.
>FDA approvals will involve significant investments: eight to 10 years of development time and between $100 and $200 million, compared with three to five years and $1 million to $5 million for generic drugs.
>Biosimilars will be dominated by larger companies and large-market (above $250 million) indications
>Biosimlars will experience slower uptake and lower market share than generic drugs due to the lack of automatic substitution (4). 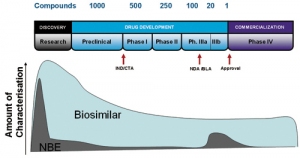 Nonclinical data typically encompass comparative in vitro pharmacology and in vivo studies of efficacy, pharmacokinetics, and possibly toxicology, including toxicokinetics, antidrug antibody, and local tolerance. Biological characterization, usually part of the Chemistry, Manufacturing, and Controls (CMC) or drug quality package, also needs to be included in the nonclinical safety data package. In vitro and cell-based characterization will be the most critical assays from a nonclinical comparability perspective.

One caveat to using existing data that has been generated in studies on older biological drugs is that the data may not be sufficiently detailed or comparable for validating study endpoints. Keep in mind that toxicokinetic and antidrug antibody data may be sparse or nonexistent and animal models used in older studies may no longer be available or relevant. Moreover, analytical methods have improved significantly, as has the ability to utilize biomarkers.

Preclinical CMC studies are crucial for achieving an abbreviated approval pathway for a biosimilar. GMP batch release assays should be supplemented by additional characterization studies to enhance the claim of similarity, for example with GMP/GLP cell-based and in vitro assays. Because innovator companies do not publish detailed CMC results, this information must be produced independently using results from clone selection, media and feed development, purification and formulation.

Biosimilar developers may improve on the innovator molecule through modern manufacturing and analytics, but this improvement may trigger designation by regulatory authorities as a "biobetter," or even an innovator drug, resulting in a more extensive development pathway. Biobetters are considered new molecular entities and usually require a full development process.

Analytical methods for developing biosimilars are similar to those used for developing innovator drugs. However, because the goal with biosimilars is comparability, the approaches and issues associated with the analytical methods are somewhat different, as explained below. For a biosimilar erythropoietin (EPO), for example, the sponsor must use the same EPO brand as the comparator. The sponsor must purchase several lots and either aim for properties somewhere in the middle of the range shown by the innovator drug or demonstrate the same level of variability. The same approach applies to stability, accelerated stability, and shelf life.

Comparative in vivo animal efficacy studies are useful in demonstrating nonclinical similarity. Some models, however, are proprietary, and others may have become redundant since the innovator drug was introduced. By contrast, comparative in vivo animal safety studies can be less valuable. EMA product specific guidelines, for example, suggest that the rodent is the species of choice wherever possible for biosimilar testing (3). This type of testing is possible with compounds such as EPO, but less so with monoclonal antibodies, where nonhuman primates are frequently the only relevant species. Animal safety studies may be complemented by an assessment of pharmacodynamic responses in some cases, but this is not always possible with highly human-specific biotherapeutics.

The majority of biologics do not show true toxicity, but rather exaggerated pharmacology. Hence, toxicology studies may add limited value for these molecules if not carefully designed.

Early discussions with regulators regarding clinical studies of biosimilars are highly recommended to confirm that the preclinical package will adequately support clinical development. These discussions also are essential if the sponsor plans to extrapolate efficacy and safety data across different indications.

Certain clinical study design issues are specific to biosimilars. Comparability must be shown in a step-wise fashion in both the pharmacokinetic and pharmacodynamic settings. Immunogenicty assessment is also required to show correlation to clinical efficacy and safety. Sponsors need to evaluate immunogenicity in all individuals in the clinical trial, not only those who are symptomatic. Sponsors must demonstrate clinical efficacy and safety through clearly defined comparability margins. Equivalence studies are required under the current European guidance, but noninferiority designs may be acceptable.

To streamline patient recruitment, sponsors may petition to combine Phases I and III, a strategy that EMA is currently considering. Securing patients and investigator sites is yet another reason to perform preliminary clinical feasibility studies well ahead of Phase III, preferably during preclinical work. An important consideration of clinical feasibility assessment/site identification is that some sites motivated by innovative or novel studies may not wish to participate in biosimilar studies.

Drug supply can affect how the sponsor chooses to test a drug. Studies conducted in the European Union, for example, must employ reference material registered in Europe. In the US, FDA is likely to require US-registered material (2). Regulators in both regions are in discussion and considering ways to relax origination rules, perhaps by allowing for a future single source option for reference material.

Although biosimilars are not expected to pose any more risk to patients than innovator drugs, their developers should be prepared for significant postmarketing commitments. A potential hurdle with biosimilar pharmacovigilance is specifically tracking which drug patients receive. This problem already is apparent among the branded EPO class drugs. A patient, for example, may receive three different molecules that read "EPO" from three different manufacturers. Unless hospital staff are instructed to maintain strict records, determining which product was administered is difficult, and tracing adverse events backwards can be impossible.

As with innovator drugs, the commercial success of biosimilars depends on the three main stakeholders of market access: payers, providers, and patients. Although the potential cost savings that biosimilars offer may be attractive to payers, some may be reluctant to steer utilization towards these agents without compelling safety, efficacy, and comparability data. Similarly, prescribers and patients may prefer proven treatments over somewhat less-expensive products that may not have a track record.

To facilitate market access, biosimilar developers should therefore consider providing customer support resources, such as reimbursement hotlines, that are on par with those offered for innovator drugs. This offering could be especially relevant for indications such as oncology, where providers have high expectations regarding customer support. Market access will become even more competitive as biosimilars enter the market because innovator companies are expected to ramp up their own customer support resources to solidify brand loyalty. Biosimilars developers also should engage in the full spectrum of market access planning activities, such as conducting landscape assessments and performing market research with stakeholders, early on in clinical development.

Biosimilars development presents challenges at every level, from selection of a manufacturing platform, to analytical assays demonstrating comparability, to in vivo testing and clinical testing, market access, and postmarketing surveillance. Sponsors can minimize roadblocks while streamlining biosimilar development by frontloading analytical methods that demonstrate comparability with the reference molecule, selecting animal studies judiciously, and preparing to maintain a Phase IV drug registry. Companies that navigate these activities successfully may be rewarded with an expedited regulatory review.