Close collaboration between academic and industrial groups is vital to ensuring glycosylation models are fit for deployment. 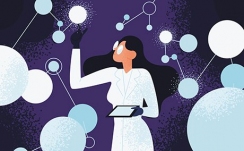 Biopharmaceutical glycosylation variability is determined by manufacturing bioprocess conditions (1). Large-scale mammalian cell culture is used for the manufacture of all therapeutic glycoproteins (TGPs), with Chinese hamster ovary (CHO) and murine myeloma (NS0 and Sp2/0) cell lines being the most-commonly used production platforms (5). During cell culture, even subtle variations in nutrient availability, dissolved oxygen, temperature, ammonia, and pH may impact the intracellular process of glycosylation (1,3) and yield product that cannot be administered to patients. Due to its bioprocess-associated variability and impact on safety, pharmacokinetics, and pharmacodynamics, glycosylation is widely regarded as a critical quality attribute (CQA) of TGPs (1).

In the context of biopharmaceutical quality assurance, 21 mathematical models for protein glycosylation have been developed over the past decade. Although the strategies to mathematically describe the glycosylation process have been diverse, all models have demonstrated potential toward addressing one or more quality assurance (QA) issues associated with TGP manufacture. This review focuses on how different modeling strategies can be leveraged to aid in product QA across the different stages of biopharmaceutical product development and manufacture. Technical details on glycosylation models have been outlined elsewhere (6).

Glycosylation impacts the safety and efficacy of protein therapeutics

The following individual glycosylation motifs that are known to influence the safety, pharmacokinetics, and pharmacodynamics of TGPs are presented in Figure 1:

• Presence of high-mannose glycans, in particular, the five-mannose glycan (Man5), reduces the serum half-life of antibodies (7). Man5 may also enhance antibody-dependent cellular cytotoxicity (ADCC) (8), a mechanism that improves the oncolytic activity of mAbs.
• Tandem α-1,3 galactose is a non-human glycosylation motif that is produced by murine cell lines, such as NS0 and Sp2/0 (9) and has also been observed in CHO cells (10). Presence of α-1,3 galactose residues has been reported to cause fatal anaphylaxis in patients treated with Cetuximab (Erbitux, Bristol-Myers Squibb/Merck) (9,11). These cases occurred in patients who were allergic to α-galactose, a condition likely caused by exposure to tick bites (9,11). To avoid these reactions, patients are now screened for α-galactose allergy prior to treatment with Cetuximab (9,11).
• The absence of core fucose has been reported to enhance mAb ADCC activity up to 50-fold in in-vitro studies (12). Cell engineering strategies to eliminate core fucosylation have resulted in two commercially-available glycoengineered mAb products, mogamulizumab (Poteligeo, Kyowa Kirin) and obinutuzumab (Gazyva, Roche).
• High levels of β-1,4 galactosylation on the Fc glycans of mAbs enhance their complement-dependent cytotoxicity (CDC) (13) and ADCC (14). High β-1,4 galactosylation is, therefore, a preferable attribute of oncolytic mAbs.
• High levels of α-2,6 sialylation have been linked with enhanced anti-inflammatory activity in intravenous immunoglobulin (IVIg) therapies (15) and would, thus, be a desirable attribute of immune-modulating TGPs, such as adalimumab (Humira, AbbVie) and Enbrel. Importantly, the anti-inflammatory properties of sialylation are exclusive to the glycosidic bond conformation (α-2,6) and the sialic acid species (N-acetylneuraminic acid, Neu5Ac) involved (15). CHO, NS0, and Sp2/0 cell lines only produce α-2,3 bonds and may also produce sialylation with N-glycolyl neuraminic acid (Neu5Gc), a moiety that may be immunogenic in humans (16). Higher Neu5Ac sialylation has also been reported to increase the serum half-life of TGPs (17). 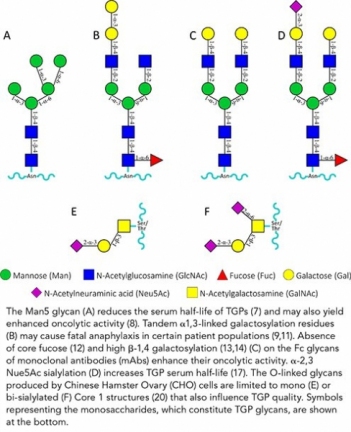 Protein asparagine (N)-linked glycosylation occurs in two steps (18). The first occurs while the protein is being synthesized in the endoplasmic reticulum and entails the covalent addition of a large unprocessed precursor oligosaccharide to asparagine residues of the protein backbone. The glycoprotein is then transferred, via vesicles, to the Golgi apparatus, where the second and final step of the N-glycosylation process occurs: while transiting through Golgi, the protein-bound glycan is sequentially modified by several enzyme-catalyzed carbohydrate removal and addition reactions.

Serine/threonine (O)-linked glycosylation occurs entirely in the Golgi apparatus and begins with the addition of N-acetylgalactosamine (GalNAc) to serine or threonine residues on the protein backbone (19). After this first step, the glycan is modified by a sequence of enzyme-catalyzed monosaccharide addition reactions that extend its branching and length (19). CHO cells produce only two O-glycosylation variants, which consist of the mono- and bi-sialylated ‘Core 1’ structures shown in Figure 1 (20).

Models of therapeutic protein glycosylation (2009 to 2019)

The first model for N-glycosylation, published in 1996, aimed to describe the addition of glycans to the peptide backbone of proteins (24). From then, N-glycosylation models expanded to include the extent of glycan processing within the Golgi apparatus, thus aiming to depict the variability observed in TGP glycosylation profiles. Descriptions of glycosylation soon required strategies for automatically generating the complex reaction networks involved in the process and were pioneered by Krambeck and Betenbaugh in 2005 (25). Building on these seminal studies, more than 20 mathematical models for protein glycosylation have been developed to date. Based on structure and solution strategy, the mathematical models of TGP glycosylation can be grouped into three categories: kinetic models, flux-based models, and statistical models.

Kinetic models attempt to capture the time-dependent mechanisms underlying glycosylation and are based on dynamic material balances for all TGPs and NSDs present in Golgi (26–28). Given the inherently dynamic nature of cell culture processes, kinetic models are particularly suited to describe the effects bioprocess conditions have on TGP glycosylation. A fundamental drawback of kinetic models is that they require a substantial amount of experimental data to determine robust values for their unknown parameters (e.g., enzyme kinetic rate constants).

Flux-based glycosylation models consist of material balances for all TGPs present in the Golgi apparatus and are built using reaction networks that define the production and consumption stoichiometry of each species. To solve flux models, steady state is assumed, and the resulting system of linear equations is solved for the rates (fluxes) at which all TGPs are interconverted. Because the resulting system of linear equations is usually underdetermined (more unknown fluxes than equations), flux models must be solved using constraint-based linear programming (29,30) or probabilistic methods, such as Markov chain Monte Carlo simulations (31,32). A key advantage of flux-based models is that their solution requires reduced amounts of experimental data. The main drawback of flux-based models is that their solution inherently assumes steady-state, which limits their ability to describe the dynamic shifts in TGP glycosylation often observed in cell culture processes. This limitation has been recently addressed by including parameters representing dynamic shifts in TGP residence time within Golgi (30).

Table I presents the glycosylation models that have been developed since 2009 and highlights how each model has been used toward potential TGP quality assurance applications. 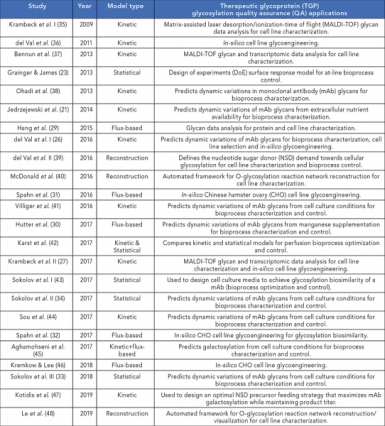 Kinetic models appear to be the most versatile, having been used for all four application areas. Flux-based models have mainly focused on cell line selection and glycoengineering, and statistical models have been used for bioprocess characterization, control, and optimization. The application areas for the different modeling strategies results from their underlying features. Because kinetic models aim to mechanistically describe the glycosylation process, they are capable of covering all QA application areas. Flux models are well-suited to define cell glycoengineering strategies because they focus on the rates of glycoenzyme-catalyzed reactions. By definition, statistical models quantitatively represent correlations between bioprocess conditions and TGP glycosylation. Therefore, they are particularly adept for bioprocess control and optimization QA applications when mechanistic bioprocess knowledge is lacking.

Although the deployment of statistical models in industry is increasing at an accelerated pace (49), the use of mechanistic glycosylation models remains to be widespread. This disparity may arise from the use of specialized software and the perceived need for expert user input associated with mechanistic modeling. Despite these challenges, mechanistic models are, conceptually, more versatile than their statistical counterparts because they are based on the biochemical mechanisms underlying the glycosylation process. An interesting example where these limitations are addressed is the GLYMMER (ReacTech) software platform, which is based on the work by Bennun et al. (37), runs on Microsoft Excel, and requires only moderate user input and expertise.

The deployment of different glycosylation modeling strategies depends entirely on the TGP quality assurance application they will be used for. Statistical models can be readily deployed in the industrial setting for bioprocess design, control, and optimization (33,43) with minimal user input and expertise. Mechanistic models (kinetic and flux-based) have been shown to be particularly robust for cell line characterization (27,50) and glycoengineering (26,31) as well as for bioprocess design and optimization (42,47).

To fully exploit the advances in glycosylation modeling toward the development, control, and optimization of next-generation TGP production bioprocesses, close collaboration between academic and industrial groups must continue so that the models are fit for purpose and require minimal end-user expertise for deployment.