Ligand-Binding Assays and the Determination of Biosimilarity 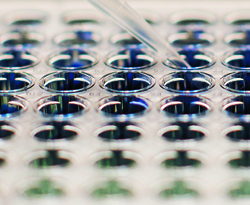 During biosimilar development, it is necessary to demonstrate that the physicochemical properties, efficacy, and safety (e.g., immunogenicity) of the biosimilar are similar to those of the targeted branded biologic. Therefore, in addition to structural and biochemical analyses of biosimilars for confirmation of the physical and chemical characteristics of the biosimilar, it is necessary to demonstrate that the pharmacodynamics (PD), pharmacokinetics (PK), and immunogenicity of the biosimilar are also comparable to those of the branded drug. Consequently, functional assays, such as ligand-binding assays (LBAs) and mechanism of action (MOA) cell-based assays (CBAs), must be developed to effectively assess biosimilars. In many cases, LBAs are crucial for determining PK and PD behavior, and they are also often used as orthogonal assays to CBAs.

The importance of binding activity
Most biotherapeutics rely on specific binding activities to achieve a clinical effect. Therefore, matching the binding activities of a biosimilar candidate to those of the reference product is part of the process of developing a biosimilar and something that is expected by both the European Medicines Agency (EMA) and FDA, according to Gino Grampp, R&D policy director for Amgen. Physicochemical assays for testing of originator and biosimilar molecules, however, can only assess the actual structure of the molecules, and do not provide information on the functional conformation of the molecules and how they interact with the intended target. “Only a functional assay, such as an LBA or CBA, can fully address this issue,” says Michael Sadick, senior manager for large molecule analytical chemistry with Catalent Pharma Solutions.

For monoclonal antibodies (mAbs), which make up a large portion of the biosimilars currently under development, it is important to remember that the different ends of the molecule are involved in binding with different activities (the Fab and Fc regions, which bind to the antibody target/ligand and Fc receptors [CD64, CD32, CD16, and FcRN], respectively). While in-vitro and/or in-vivo biological activity assessments provide vital holistic information on biosimilarity, a combination of ligand- and Fc-binding assessments may provide more sensitive and mechanistic values for biosimilarity, according to Sadic.

FDA, in its May 2014 draft guidance on how to show biosimilarity using clinical pharmacological data, indicated that LBAs, concentration and activity assays, and PD assays were important for biosimilar product development (1). In particular, according to Grampp, FDA suggested in the 2014 guidance that analytical assays should be able to specifically detect active drug, for example via binding assays that use reagents specific for the binding sites for the drug (e.g., the complementarity determining regions [CDRs] of an antibody). “In this case, the binding assay is used not just to detect the molecule concentration, but to test the in-vivo properties of the molecule, and therefore, a well-designed and sensitive assay can be of great benefit to a biosimilar developer,” Grampp observes.

In October 2014, the American Association of Pharmaceutical Scientists (AAPS) Ligand-Binding Assay Bioanalytical Focus Group Biosimilars Action Program Committee published a whitepaper with recommendation for the development and validation of ligand-binding assays for PK assessments (2). Sadick notes that the AAPS whitepaper has similar conclusions regarding LBAs for bioanalytical testing as appear in the FDA 2014 guidance. “Biosimilarity testing for bioanalytical samples [PK/PD studies] is pretty much fully dependent on ligand-binding analyses. Binding assays are useful for not only assessment of the similarity of the final structures of the originator and biosimilar molecules, but also for assessment of the similarity of the antigenicity of the originator and biosimilar molecules. Binding assays work very well for the detection of anti-drug antibodies, and for testing which of those antibodies may have drug-activity-neutralizing potential,” says Sadick.

LBAs vs. CBAs
Binding activities can be determined by either cell-based assays or ligand-binding assays. Ligand-binding assays are of great importance for the analysis and comparison of the originator and biosimilar therapeutic for both testing of the drug before administration to preclinical or clinical recipients, as well as for testing of an active drug in preclinical or clinical recipient sera, according to Sadick. The latter would include both assessment of the function of the drug in the serum, as well as the activity of potentially induced host neutralizing anti-drug antibodies (nAbs). “Very importantly, for bioanalytical studies there are very few cell-based bioassays capable of working with sera derived from preclinical or clinical recipients. Thus, for bioanalytical assessments of biosimilarity, ligand-binding assays are in many cases the only functional assays available,” Sadick states.

In addition, ligand-binding assays enable the characterization of the potency of different biosimilars and provide crucial information on the affinity (dissociation rate constant, KD) and selectivity of biosimilars to specific targets, according to Roger Bosse, senior product leader for research reagents with PerkinElmer. He adds that regulatory authorities recommend simple and reliable methods for the characterization of biosimilars, and LBAs are one type of alternative.

Just one part of the story
It is, in fact, important to remember that the totality of evidence--a stepwise approach to evidence development that includes both structural and functional analyses--will ultimately be required to address residual uncertainties and establish biosimilarity, according to Margaret Karow, executive director of biosimilars process development at Amgen.

“While target binding assays are a critical component of the analytical comparison of biosimilars to their corresponding reference products, the assays do not replace other analytical assessments required, nor do they provide information about the activities of the molecules, such as cellular signaling or effector functions (antibody-dependent cell-mediated cytotoxicity and complement-dependent cytotoxicity). Furthermore, the assays cannot predict the extent of clinical benefit or potential differences in safety, such as those identified risks for the reference product or unidentified risks for the biosimilar, and lastly they are not predictive of a molecule’s potential immunogenicity,” she states.

Selection and design challenges
One of the biggest challenges with LBAs is determining when they are appropriate. “LBAs are certainly easier for starting a development campaign, but recent regulatory guidelines indicate that a cell-based MOA bioassay should accompany the development of a drug candidate as early as possible,” says Reuter. If an LBA is used for determining the MOA or bioactivity of a molecule, it must eventually be translated to a cell-based format, and therefore it is necessary to demonstrate perfect correlation between the LBA and the cellular assay.“ Adapting traditional complex cellular functional assays into simpler binding assays that rely on purified cellular components (e.g., cell surface receptors) is another important challenge,” Reuter adds. PerkinElmer is developing both binding and functional assays for characterization and cell-based determination of the MOAs of biological drugs (including biosimilars) that bind to specific cell-surface receptors, antigens, or soluble ligands using various technologies.

Target solubility is another issue, according to Karow. “High-throughput, kinetic assessment of target binding on cells for those targets that cannot be produced as soluble proteins remains a challenge for the industry,” she observes. Several companies are, however, developing technologies designed to overcome this problem, including high-throughput, high-performance, real-time, label-free analysis systems.

For Catalent, the need to derivatize therapeutic mAbs, or the “test” moieties, to immobilize them has been a concern. “It is more optimal to immobilize the receptors so that the mAb samples could be analyzed without any derivatization,” says Sadick. Therefore, the company immobilized all six recombinant Fc receptors on nickel-coated biosensor tips for use in BLI analyses. “With this approach to binding kinetic analysis, the KD values for mAbs, both originator molecules and biosimilars, can be accurately and reproducibly determined,” he asserts.

About the Author
Cynthia A. Challener, PhD, is a contributing editor to BioPharm International.