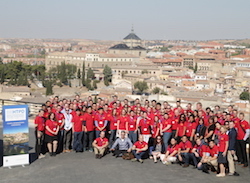 Modeling and miniaturization were two key take-home messages from the 4th High Throughput Process Development (HTPD) conference organized in October 2017 in Toledo, Spain. The conference brought together 99 participants from 17 countries and 44 different companies/academic institutions. The 26 posters and 27 presentations divided into seven sessions plus one plenary lecture provided a large amount of scientific and technical content over the course of the four-day conference, and the discussions and exchange of infromation during the meeting was both open and intense.


The HTPD conference series started as a joint initiative by GE Healthcare and Genentech in 2010 at a time when high-throughput process development (HTPD) was in its early days. HTPD was mainly limited to 96-well plates filled with chromatography resins used for resin selection and initial screening of running condition. Since then, HTPD in chromatography applications has been well established among most biopharmaceutical companies, but has also expanded to upstream and cell culture screening as well as to formulation applications.

The opening plenary lecture, “Miniaturization in Process Development—HTPD at the Nano Scale” by Marcel Ottens, associate professor at Delft University of Technology (TU Delft) in the Netherlands, set the tone of the 4th HTPD meeting. Ottens reviewed how knowledge-based chromatographic process development based on mechanistic modeling will become more important and more utilized in the industry in the coming years. He also emphasized that scale in development has the potential to go down further. Ottens presented work performed at TU Delft with a novel microfluidic system on a lab chip. Integration of parallel micromixers and microcolumns (50-70 nL scale) on the chip allowed solid-phase micro-column anion exchange linear gradient chromatography on a single chip.

Smart Process Development
In the first session of the conference, “Smart Process Development,” chaired by Professor Jürgen Hubbuch from Karlsruhe Institute of Technology, the theme of knowledge-based process development continued. Several talks in the session discussed the use, limits, and potential of models—mainly in chromatographic applications. Ferdinand Stückler from Roche presented several case studies on how mechanistic modelling of chromatography are used at his company. Stückler not only showed how the approach could be used for deeper process understanding in early process development, but also the benefits of mechanistic models at the process characterization, validation, and final commercial stages.

The first session also contained one appreciated talk from outside the core field, with Luis Cascão-Pereira from DuPont talking about white biotechnology and process development of enzymes used for washing powder. Though the scale of the final process presented was significantly different, with a 300,000-L fermenter (!) producing the enzymes, similarities could be seen in both approach and challenges, with in silico process development, construction of focused combinatorial libraries and handling of large dataset.

The “Case Studies Upstream” session was chaired by Jonathan Coffman from Boehringer Ingelheim, and reviewed several cases in which recent advances in high-throughput automated minibioreactor systems improved development timelines and the quality of scale-down models.

However, conference attendees said in a survey that the presentation they considered to make the most significant advancement in the field dealt with nanoscale process development. Keith Breinlinger from Berkeley Lights presented their OptoSelect chip technology and how it could be used for improved clone selection. Breinlinger presented a platform that could automate cell line development by operating single cells in a nanofluidic environment. Using light, single cells were isolated in individual nanoliter-sized wells, and growth rates could then be simultaneously monitored on thousands of clones. Top producing clones were selected by titer and growth and could potentially be ready to be scaled up to bioreactor.

New for the 2017 HTPD conference was the Best Poster Award, as voted on by the meeting delegates. This year's clear winner was “Implementation of an Analytical Microfluidic Device for the Quantification of Protein Concentrations in a High-throughput Format” presented by Therese Schermeyer from Karlsruhe Institute of Technology. Schermeyer presented the SpeChip, a simple but innovative device constructed according to the microplate format where each channel structure had four measurement chambers of different height giving a four-point calibration.

In the downstream space, the conference naturally covered chromatography, but also included a session about how HTPD approaches goes beyond chromatography. Jennifer Pollard from Merck, USA chaired the session, “Case Studies Downstream Part I: Chromatography: Now What?” Though HTPD is well established in chromatography, there is still a lot of interest in the area. According to a survey, the majority of attendees felt this session was the most interesting of all. As the session title indicates, the question was how to push HTPD further in chromatographic applications. Several talks focused on the utilization of miniaturized columns, such as Robocolumns, and if they could become an even more important tool going forward and especially in late -tage development. For example, Michael Chinn from Genentech presented data from ongoing studies investigating if and how scale-down models could be used in process characterization and validation studies. Chinn compared Robocolumn outputs to manufacturing column outputs. Most challenging are bind-elute applications since there are known offsets, for example, in elution volumes between column formats. Though it could limit scalability, Chinn emphasized that offsets could be acceptable as long as the sources of difference is understood.

The second downstream session,“Case Studies Downstream Part II: Other Techniques,” chaired by Ashley Hesslein from Bayer HealthCare, not only covered additional techniques such as cross flow filtration, but also the connection between upstream and downstream. Cornelia Walther from Boehringer Ingelheim presented a case study on integrated process development and work with inclusion bodies (IB). Walther presented a miniaturized and parallelized downstream process consisting of mechanical cell disruption, IB wash, protein renaturation, and capture chromatography carried out in 96-well plates, and how this work could support optimization of the upstream fermentation process.


Formulation and Frontiers
At previous HTPD conferences, there were relatively few talks on formulation. At the 2017 meeting, the session, “Case studies Drug Substance and Drug Product Formulations” chaired by Aaron Noyes from Codiak BioSciences, contained several talks showing good progress in the area. For instance, Anthony Portolesi and David Smithson, both from Genentech, presented high-throughput TFF for formulation using a Sartorius beta system, and also how static light scattering could be used for stability screening.

The final session of the conference “Frontiers in Process Development” was chaired by Stefan Hepbildikler, Roche, Germany, and was intended to be the most forward-looking session. Several talks accepted the challenge. Bill Whitford from GE Healthcare presented an extensive overview on “Process Development in the Digital Biomanufacturing Age” with digital twins and data-mining strategies. Carsten Radtke from Karlsruhe Institute of Technology presented novel approaches with 3D printing for new HTPD tools and also an entry point to bioprinting. And, Oliver Hardick from Puridify presented how their nanofiber-based FibroSelect technology could be studied in high-throughput process development workflows.


Summary
Based on feedback from attendees, the 4th HTPD conference might have been the most successful HTPD event ever, with 75% of the survey respondents labeling the event "Excellent" and 24% as "Good." Should there be a 5th HTPD meeting? 100% of attendees said "Yes," but no decision has been made by organizers. If so, two areas that were highly requested are high-throughput analytics and data management/data mining.

In conclusion, during the four days in October in Toledo, it was obvious that HTPD is still rapidly progressing. Conference co-chair Phil Lester from Roche, concluded the conference with a quote by Miguel de Cervantes as an homage to the famous Cervantes statue in Toledo. “In order to attain the impossible, one must attempt the absurd.” Even if not taken literally, the quote could be seen as inspiration to the biotech industry to take next steps in high-throughput process development.