Model effectiveness is determined by the quality and composition of the data inputs. 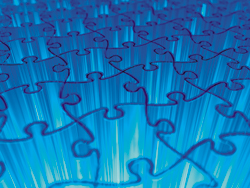 Bioreactor design, including the geometry of the tank and impeller and the locations of inlets, has a direct impact on the performance of cell-culture and fermentation processes. Modeling of bioprocesses is an essential tool when determining the best bioreactor for a new process, when moving a process from one type of bioreactor to another (e.g., stainless steel to single use) or transferring a process to similar but slightly different bioreactors, and when scaling up from the laboratory to commercial production. The accuracy of any simulated results is, however, directly related to the quantity and quality of the data inputs and the resolution of the model.

There are many reasons why biopharmaceutical manufacturers invest in the development of bioreactor modeling capabilities. Modeling is used to gain insight into not only bioreactor performance, but to evaluate the economics and operational excellence of bioprocesses, as well as for process optimization (scale-up, scale-down), according to Ken Clapp, senior manager for applications, integration, and technology at Cytiva. “Performance may be as much about the integration of the bioreactor in the overall biomanufacturing operation as it is about the physics of fluid dynamics. Analyzing with simulation scenarios, fluid processing and sequencing may yield more practical near-term results than coming up with a novel bioreactor design through modeling,” he notes.

Typically, modeling programs are used to quantitatively describe and understand the behavior of different types and scales of bioreactors. Most widely used are commercially available computational fluid dynamics (CFD) software packages, according to Christel Fenge, vice-president of product management and marketing for fermentation technologies with Sartorius. “These programs are used in industry to understand potential differences in the fluid dynamic behavior of different bioreactors. Doing so is particularly interesting for scale-up purposes in early development to understand how to scale certain scale-dependent parameters to large-scale production bioreactors, but also when moving to a scale-down model during late-phase development,” she says. It is important to be certain that the small-scale model used to determine the design space and the operating ranges of critical process parameters provides predictive results comparable to the production-scale bioreactors.

One specific application noted by Fenge is relevant to cell growth on carriers (e.g., in the vaccine and regenerative medicine sectors). “CFD modeling is used to understand the shear forces in the different regions of a bioreactor, particularly those close to the stirrer, to predict if the bioreactor design will maintain the microcarrier culture in a homogeneous suspension without resulting in cell damage.

While simple CFD modeling programs are available commercially, there are no off-the-shelf solutions for the conversion of scale-dependent parameters, according to McHugh. “Users must develop their own calculation sheets in programs such as Excel [Microsoft] or MatLab [Mathworks] based on known mathematical relationships and using first principles modeling techniques,” he observes.

In general, process-specific data must also be generated to perform these modeling studies because oxygen transfer and mixing times differ depending on the medium used and the bioreactor fill volume and general set-up. Specifically with regard to CFD modeling, prediction of a real process (e.g., a Chinese hamster ovary [CHO] fed-batch process with normal cell densities and gas bubble behavior) over a certain time is not feasible, according to Christian Löffelholz, CFD modeling expert and sales representative with Sartorius. “Simplified models and equations are needed to improve the accuracy of the predictions,” he notes.

For CFD modeling, McHugh adds that the resolution of the wireframe used to model the bioreactor must be sufficient. One-, two-, and three-phase models that consider liquids only, liquid and gassing effects, and liquids, solids, and gasses, respectively, can be used. Typically due to extensive computational requirements, one-phase modeling is performed. With the rapidly increasing accessibility of high-speed computing power, he does add, though, that multiphase and higher resolution models are being used more frequently.

In addition, many of the current models and modeling programs are limited by the data sets from which they are built, according to McHugh. “Depending on the number of data points and types of conditions tested, the model may not account for all operating conditions,” he explains. On a positive note, he points out that as standardization of reactor geometries for single-use systems occurs, the number of reactor geometries that require characterization is decreasing, which is creating an opportunity for manufacturers to characterize their systems, potentially in collaboration with their customers, and develop better models for scaling.

Clapp also stresses that off-the-shelf products only provide the engine for modeling; the user, equipment supplier, or third-party service provider must have the capability to create a model and perform the simulations. “The real work is building the model within whichever tool is chosen,” he states.

Challenges to successful modeling come from technical and resource limitations. On a technical level, the more general difficulties with using fluid dynamic modeling software tools are related to local and time-resolved predictions for real cultivation processes, according to Löffelholz. In particular, he notes that the gas transfer of gas bubbles or bursting bubbles cannot be calculated with conventional computer technologies, and thus there is a need to generate a large quantity of physical data to incorporate these behaviors, and simplified models are often used to avoid such effort. “Ultimately, researchers aim to translate the hydrodynamic/physical parameters to the biological environment and to predict the biological system (e.g., cell growth and productivity) at different scales or in different bioreactor designs.”

When using scale-down models, McHugh adds that because small-scale reactors perform differently than large-scale reactors with respect to mixing time, mass transfer, gas stripping, etc., it is important to operate small-scale models within a design space appropriate for the bioreactors the process is intended to be scaled to. “We strongly recommend that the bioreactor engineering and operating parameter limitations of small-scale models used during process development and characterization be considered in such a way that the process design space is developed based on bioreactor operating parameters that can be established robustly at scale,” he asserts.

Resource issues can be just as significant, according to Clapp. “The most common challenge in modeling bioreactor performance is having skilled personnel that can translate the model parameter inputs into an effective model and make use of the fine and subtle capabilities in the tool to run meaningful simulations,” he explains.

With respect to specific bioreactor models, Clapp notes that the challenges increase as more is expected. “Getting accurate 3-D measurements for tank internals is straightforward. Similarly accurate measurements for impellers are more difficult. The bulk of the model output, such as mixing times and homogeneity, can be determined, but getting into model results based on detailed bubble characteristics, such as size distribution and coalescence, is much more challenging.” He does note that 3-D scanners make it possible to turn complex structures into machine-readable data that can then be added to a model.

Modeling, when an accurate model is available, provides a universal comparator; a properly implemented model run with an appropriate simulation may allow an accurate comparison between two or more designs/technologies. “Regardless of the modeling tool, the quality of the result will be dependent on the quality of the input,” states Clapp. He adds that a modeling exercise may require proprietary source material and is likely to provide proprietary results, which may be highly specific.

“At the end of the day, cell-culture or microbial bioreactor runs evaluating growth, productivity, and product quality will confirm if a model is predictive,” Fenge states. Effective models can, however, provide guidance to minimize the number of required experimental runs and reduce risks. On the other hand, modeling is less appropriate when the model is unable to hold critical parameters at the level they will be in production scale, according to McHugh. “Typically all models are useful in some capacity, but it is important to understand the limits of the model you are using,” he concludes.