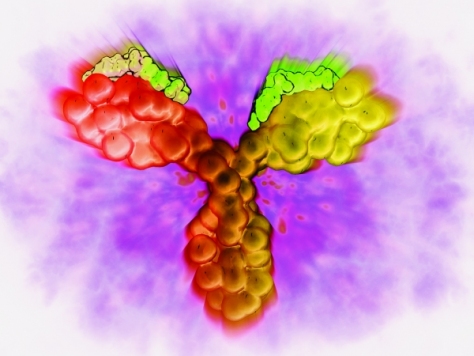 The biosimilars market, many analysts believe, is on the cusp of significant growth. This growth in large part is due to the fact that numerous monoclonal antibody (mAb) biosimilars are expected to be launched in the next few years as patents on key drugs, such as infliximab (Remicade from Johnson & Johnson), trastuzumab (Herceptin from Roche), and Adalimumab (Humira from Abbott), expire. The European Medicines Agency (EMA) approved the first mAb biosimilar developed by Celltrion and Hospira in 2013 (infliximab: Remsima/Inflectra). Development of clear, regulatory approval pathways for biosimilars in emerging markets is creating large, additional opportunities for biosimilar mAbs. Education of physicians, pharmacists, and patients by biosimilar manufacturers and strong support for adoption by individual governments is, however, also required if biosimilar mAbs—and the biosimilar market as a whole—are to reach their full potential.

Importance of mAbs
McKinsey & Company estimates that 40% of biosimilars in development are mAbs, and that percentage will only increase as fewer first-generation biosimilars are introduced and the competitive focus keeps turning to mAbs. In March 2012, 73 biosimilar mAbs were under development, with 59 at the preclinical stage, five in Phase I or II, and nine in Phase III. At least 20 companies are, for example, developing biosimilars for trastuzumab. “Biosimilars from only a few, small, product classes have been approved to date. mAbs comprise a much larger class, and by 2020, patents are set to expire on several mAb-based drugs with annual sales greater than $5 billion each in the year of US expiry,” says Jorge Santos da Silva, a principal in the Swiss office of McKinsey & Company.

mAbs are also extremely costly, and biologic versions are needed to maintain functioning healthcare systems, according to Theodor Dingermann, a professor and director of the Department of Pharmaceutical Biology at Goethe University, Frankfurt, Germany. Biosimilar versions of mAbs have the potential to offer cost reductions of 25-30%, according to Srinivas Sashidhar, a senior research analyst for life-sciences with Frost and Sullivan. He adds that mAbs are also available for a much wider range of indications than the protein-based biosimilars available today. “Antibodies are revolutionary drugs that address previously unmet medical needs by binding to specific targets. However, countless patients around the world do not have access to these state-of-the-art therapeutics due to their high price. Celltrion’s goal is to make antibodies more affordable to patients through the development of biosimilar mAbs,” says Joon Seok Kim, public relations manager for Celltrion.

Compared to the relatively small protein-based drugs for which biosimilars have been approved by EMA, such as epoetins, filgrastims, growth hormones, and follitropin alfa, mAbs are much larger and more complex molecules that can be difficult to fully characterize and thus demonstrate biosimilarity. This complexity requires more complex manufacturing processes, according to Kate Keeping, senior director of biosimilars research with Decision Resources. With mAbs, notes Dingermann, glycostructures are important because they can affect the pharmacodynamics of the drug.

“A very strong set of capabilities similar to those of innovator companies, including state-of-the-art analytics for determining primary and higher-order structures, animal models, simulation tools and complex algorithms, expertise in designing clinical trials that target the appropriate end points and do so with as few patients and as quickly as possible, plus modern manufacturing facilities and technologies, is needed to develop and produce mAb biosimilars,” observes Santos da Silva.


With such extensive requirements, it is not surprising that many companies, particularly smaller firms, that do not have sufficient capacity, are forming partnerships, according to Sashidhar. Examples in addition to Hospira and Celltrion include Merck Serono and Dr. Reddy’s Laboratories, Samsung and Merck with Biogen, Amgen and Actavis or Daiichi, Baxter and Coherus, highlights Santos da Silva.

In addition, it is quite expensive to develop more complex biosimilar mAbs, as much as a $200 million investment for one candidate, including the necessary mammalian cell culture facility built in compliance with GMP regulations and a highly educated and experienced workforce, according to Kim. “Since 2002, we have made significant investments in facilities, human resources, and technology to become a global and innovative biopharmaceutical company,” he says.

Need for clear regulatory pathways
The need to meet varying regulatory requirements in different countries/regions of the world and a lack of clarity in the approval process are challenges for developers of biosimilar mAbs. Europe is the leader in this area and has had an established biosimilar approval pathway in place since 2006. In 2012, the EMA also published final guidance, the non-clinical and clinical requirements for biosimilar mAbs, including information on pharmaco-toxicologic, pharmacokinetic, pharmacodynamic, efficacy, and safety studies. In 2013, the agency also issued a draft concept paper on the comparison of biosimilars with reference products; the similarity guidelines and clinical and non-clinical requirements were updated, and adjustments were made so that clinical trials in emerging markets can be performed with locally sourced originators.