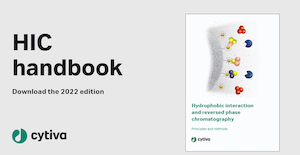 Hydrophobic interaction chromatography (HIC) separates biomolecules under mild conditions according to differences in molecular hydrophobicity. HIC is often used as a next step to purify proteins in high-salt conditions, for instance after ion exchange chromatography or ammonium sulfate precipitation. The role of this technique in protein purification in the lab and at bioprocess scale, the principle of the technique, and the equipment and resins needed are described in this detailed handbook.