Process Development: What May Lie Ahead in 2018? 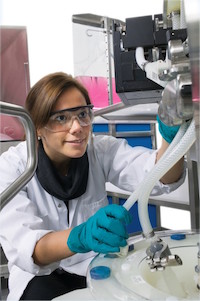 2018 is shaping up to be an interesting year in the world of biopharmaceuticals. What have 2017 developments taught us, and what may lie ahead for biopharmaceutical drug developers and process engineers? Here, we look at some of the most popular Process Development Forum articles from 2017 for insight about what may be heading down the pike in 2018.

New drug approvals are on an upward trajectory. While only 22 new drugs were approved in 2016, FDA gave its thumbs up to 46 new drugs in 2017 (of which approximately one-quarter were biologics). The figures for all new drug approvals are in line with the record numbers of approvals from 2014 and 2015, and the good news may continue into 2018.

As drug companies look for the fastest pathways to move through drug development, streamlining tech transfer continues to be an important objective. A top Process Development Forum articlefor 2017 addressed this issue, and suggested the key is to Start with the End in Mind. Surely, this strategy will remain viable in 2018 and onward as firms strive to remain one step ahead in process development and prepare for later-stage GMP work.


Scientific Advancements
The increased number of drug approvals isn’t only positive news because of the quantity. In addition to the 46 new drugs approved by FDA’s Center for Drug Evaluation and Research, the agency’s Center for Biologics Evaluation and Research approved two cell-based chimeric antigen receptor (CAR)-T cell therapies: Kymriah (tisagenlecleucel) from Novartis and Yescarta (axicabtagene ciloleucel) from Kite Pharma, a Gilead Company. In addition, the agency approved Luxturna (voretigene neparvovec-rzyl), the first FDA-approved gene therapy for a genetic disease and the first adeno-associated virus vector gene therapy approved in the US.

These developments may mark a step forward in personalized medicine and could encourage additional investment in biopharma companies.

The production side of next-gen antibodies is, thus, a key concern of Process Development Forum readers. They were very interested in a discussion about how single-use systems have great potential in the manufacture of antibody‑drug conjugates.

Single-Use in Full Force
Single-use technology continued to advance from scale-up and clinical applications to clinical manufacturing and the top-10 most popular articles on the Process Development Forum included articles about single-use technology. Single-use bioreactors, for instance, are increasingly available from a host of vendors, and suppliers of such technology have made “significant advances in film technologies, bioreactor designs, stirring mechanisms, and sensor systems have contributed to the increasing adoption of disposable reactors from the lab to production scale,” according to BioPharm International.

2018 will likely see continued growth in this area, which shows no signs of plateauing. Markets and Markets recently projected single-use bioreactors will be a $1.09-billion market by 2021 (up from $408.4 million in 2016), according to the same article.

In 2017, Process Development Forum readers were particularly interested in a piece covering extraction studies for evaluating single-use biopharmaceutical manufacturing materials. This article, Evaluating E&L Studies for Single-Use Systems, was one of the site’s most-read articles of 2017, as was a blog on how GE aligned its extractables and leachables testing with the Biophorum Operations Group (BPOG) protocol.


Safety and Regulatory Concerns
As scientific breakthroughs continue to advance the biopharmaceutical industry, safety issues (new and old) must also remain a top-of-mind concern for the biopharmaceutical industry. Readers were very interested to learn how to prevent bioburden incidents in this article written by a former FDA BLA reviewer and inspector. Also hot was a second piece on protecting against microbiological contamination over the whole manufacturing process.


Regulatory issues continue to be a major concern. FDA increased its oversight and actively encouraged drug firms to upgrade or update facilities. A popular article on examined strategies for avoiding problems during regulatory investigations. In Europe, the United Kingdom’s pending departure from the European Union left many unanswered questions about drug approvals and inspections.


Top Articles of 2017
Here is a rundown of some of the most popular 2017 articles from the Process Development Forum:
· Evaluating E&L Studies for Single-Use Systems
· Improvements in Protein A Chromatography
· Prepare for an FDA Bioburden Inspection
· Bioburden Control in the Biopharmaceutical Industry
· Impact of Media Components on CQAs of Monoclonal Antibodies
· Start with the End in Mind GMP Tech Transfer
· Avoiding Investigational Failures and Discrepancies
· High Throughput Protein Purification at a Glance
· Top Trends in Biopharmaceutical Manufacturing, 2017