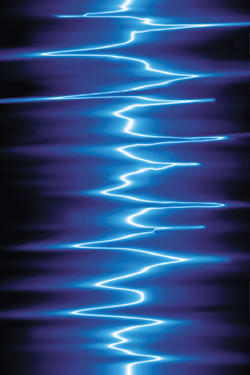 Nonviable particulate and viable microbiological surveillance are used to evaluate the design and control of a current good manufacturing practice (cGMP)-manufacturing environment. The nonviable particulate monitoring program plays an important role as it is used on a routine basis to verify the maintenance of air classifications. It is a common assumption that if fewer total particulates are present in a cleanroom, it is less likely that airborne microorganisms will be present. This is true only if human operators are the main source of particulate matter in the air. It is not possible, however, to clearly distinguish between background total particulate contamination generated largely by mechanical operations and the total particulates contributed by personnel. Thus, it is routine for cleanroom environmental monitoring (EM) programs to consist of both a total particulate component and a microbiological component.

Traditional microbial monitoring within an EM program does not provide an exact quantity and quality of the microorganisms present in the manufacturing area. Numerous studies have shown that there is a large proportion of microorganisms that are viable but unable to grow on the traditional agar media. Therefore, these microorganisms, known as viable but not culturable (VBNC), are not detected using the traditional methodology. In addition, traditional methods are unable to sample every particular location and time; these methods provide observations for only a limited time window. Consequently, the microbial monitoring program is not a way to guarantee the sterility of a given batch by collecting counts under defined specifications, but rather it helps by showing that the manufacturing process is in a continuous state of control.

A real-time laser-induced fluorescence (LIF) system, however, continuously monitors viable (microbial) and non-viable particles in real time and provides both total particulate and viable counts. LIF is a spectroscopic method in which an atom or molecule is excited to a higher energy level by the absorption of laser light followed by spontaneous emission of light (1). LIF is extremely sensitive, with a limit of detection down to one microbial cell.

The use of Trypticase Soy Agar (TSA), also known as Tryptone Soya Agar or Casein Soya Bean Digest agar, constitutes a common practice in the microbial monitoring of pharmaceutical environments. The results are obtained after enough days of incubation allow the development of colonies to be counted by visual inspection. The results are then expressed as colony forming units (CFU) per unit of sample volume or mass. Due to the length of time necessary to develop results, the traditional TSA plate-based microbial monitoring method is disadvantaged in comparison to total particulate monitoring, which can be continuously run with results obtained in real time. Moreover, it is well known that a large number of microorganisms found in natural and man-made environments (e.g., manufacturing areas) do not necessarily grow on the media under incubation conditions recommended in the pharmacopeia references. If provided with the right media and conditions, many of these microorganisms would be able to grow. Ideally, it would be good to have instrumentation capable of detecting more diverse types of microbial contaminants (including damaged, stressed, dormant, and VBNC cells) that usually do not grow on the media described in the guidelines but could potentially grow as an opportunistic infection under special conditions found in clinical patients.

The development of such instrumentation capable of providing an evaluation of microbial monitoring on a continuous and real-time basis has been facilitated by the application of LIF technology. LIF instruments use a high intensity light source to induce light scatter and fluorescence in the particles passing through an appropriate detection cell, resulting in the real-time detection of both inert particles and biologics such as bacteria, yeasts, and molds. Fluorescent (or fluorophore) dyes (molecules) can absorb light at one frequency and subsequently reemit (fluoresce) light at a different frequency. In experiments, the dyes are excited by laser light whose frequency closely matches the excitation frequency of the dye. For example, fluorescein (maximum excitation at 490 nm) is best excited by a blue-green laser, which predominantly emits wavelengths 488 (blue) and 514 (green) nm. Once excited, fluorescein’s maximum emission is at 520 nm. Because the fluoresced light is of a different frequency than the excitation light, the latter can be filtered out (2).

As shown in Figure 1, the sample is drawn through the optical chamber and illuminated by a 405-nm laser source. Light scattering occurs when any particle crosses the laser beam inside the particle flow path detection chamber. Only particles containing fluorophore molecules can give a signal at the second detector. Filters ensure only the fluorescence of the appropriate wavelength is detected on the second detector and that the general, particle-scattered light does not interfere with this signal. 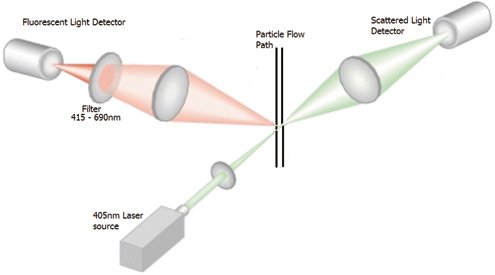 Figure 1: In a real-time laser-induced fluorescence (LIF) system, the sample is drawn through the optical chamber and illuminated by a laser source. Figures are courtesy of the author.

The fluorescence is derived from internal cellular fluorophores naturally present in molecules such as the nicotinamide adenine dinucleotide (NAD+/NADH) redox couple, which is one of the major determinants of redox state in the cell (3). NAD+/NADH drives adenosine triphosphate production in the cytosol by glycolysis and in the mitochondria by oxidative phosphorylation. The presence of NADH in the cell is a good indication of active metabolism (viability). In addition, other cellular fluorophores, such as riboflavins, which are found in all microbial cells, and dipicolinic acid (DPA), a molecule found in microbial spores, are also detected by this technology. Typically, particles in the 0.5-50 micron range are detected.

It is important to emphasize that with the LIF-based monitoring instruments, the data are reported in biologic/fluorescent counts, not CFU. If a trend is observed in the air microbial sampler, however, it will likely be observed much earlier (in real time) in the LIF monitor.

Any change in environmental conditions is apparent using LIF because data are generated in real time and continuously. Therefore, actions can be taken immediately. In addition, LIF helps to decrease risk and accelerates investigations and retraining.

The following case study shows the application of LIF technology to an evaluation of a recently refurbished cleanroom. A pharmaceutical manufacturing cleanroom was modernized and adapted to perform as a grade B area. A three-month study was set up to monitor the area “at rest” to determine the background level of the biological and nonviable particulates. 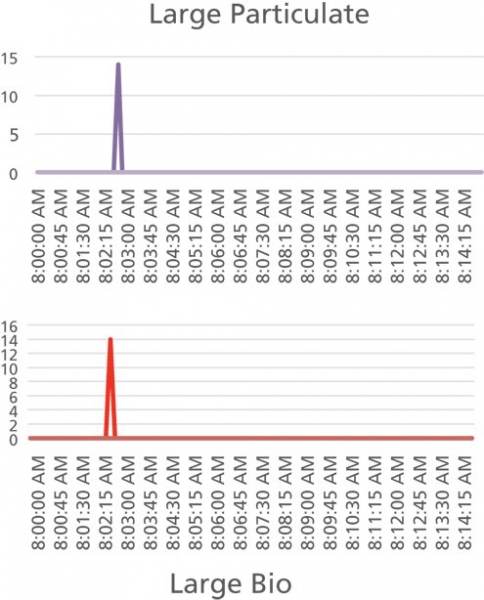 Figure 2: Real-time airborne particle monitoring results in a grade B area for both ≥ 2 µm total particulates (top) and ≥ 2 µm total biological (bottom). The area was at rest, completely closed, and monitored for three months. There was only one registered incident (three consecutive positive samples) in each channel (total particulates [bio plus inert] and bio). The incident was due to an incorrect ingress of a delivery person into the room that lasted approximately 27 seconds (involving three consecutive measurements of nine seconds each by the instrument).

During the three-month-long continuous monitoring of this room, the data showed a very low background, with counts of either zeroes or ones. Over this time period, only one deviation (incident) was observed. The incident consisted of three consecutive points at nine seconds each, shown in Figure 2 as a peak with a significant number of counts. The logbook indicated that at the time of the incident, a delivery person introduced a package into the room. The room was marked as “no-entry,” and the package was delivered to the location in error. This example demonstrates one of the capabilities of a real-time monitoring system: a brief and unplanned human-caused incident that lasted only 27 seconds was detected over a long and very clean baseline.

The pharmaceutical industry is moving toward continuous manufacturing and control to ensure full understanding of the aseptic manufacturing process and product quality. Environmental monitoring trend analysis provides an enhanced way to detect process changes before they impact the product. LIF is an ultrasensitive and rapid microbiological method for air monitoring that provides valuable process information in real time. In addition, the pharmaceutical industry has been called upon to continually raise its sterility assurance standards through ongoing increased global regulatory standards, especially over the past 10 years. Various regulatory agencies expect faster and more complete microbial contamination control. LIF is one of the solutions that both satisfies regulatory requirements and helps pharmaceutical companies save time and money by efficiently and accurately providing effective microbial monitoring.