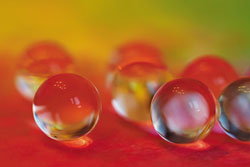 Since the introduction of commercial chromatography resins approximately six decades ago, size-exclusion chromatography (SEC) has played a significant role in the purification of proteins, viruses, enzymes, nucleic acids, and other biomolecules. While SEC may have mostly been abandoned in monoclonal antibody (mAb) and other protein purifications, it is still commonly used in the purification of viruses and plasmids.

Current uses of SEC
The mechanisms of separation by SEC are based on the apparent hydrodynamic size of the molecules in solution. This apparent size can have many contributing factors, though the size or radius of each molecule is dependent on its molecular weight. The radius of individual species in solution may vary, however, with environmental conditions such as pH, the ionic strength of the mobile phase, and the presence of solvents in the mobile phase. The formation of protein-to-protein complexes or aggregates are also contributing factors to the apparent hydrodynamic size of biomolecules.

Because SEC separates molecules based on hydrodynamic radius, it is an inherently predictable chromatographic technique if the sizes of the species to be separated are known. If the hydrodynamic size of the molecules to be separated are known, selectivity and separation range are estimated from the pore size of the resin being used. The hydrodynamic properties of the molecules in the sample may be determined, for example, by comparing the chromatogram of the sample to be purified on a high-performance liquid chromatography column with the chromatogram of a mixture of known hydrodynamic characteristics on the same column. Despite the relative predictability of SEC separations, method development at small scale is crucial to ensure a smooth transition from the bench- to manufacturing-scale operations.

With SEC, it is possible to develop a sensitive process with well-defined retention times for each molecule in the sample, and separation usually occurs in a narrow retention time band. SEC can also be used as a fast, simple step for buffer exchange. Small molecules such as salts and unconjugated labels or payloads are easily separated from larger species in desalting and buffer-exchange applications. With SEC, like other chromatographic modes, increasing the column length will enhance the resolution and increasing the column diameter will increase the sample size that can be processed per column cycle.

One advantage of using SEC includes good resolution between large and small molecules with a minimal volume of mobile phase needed. In addition, most SEC resins are chemically stable enough to handle a wide variety of mobile phases that will not interfere with the separation. Another benefit of using SEC is that the biological activity of the target of interest is preserved throughout the separation process, particularly if the target of interest requires that its quaternary structure be maintained throughout the purification process. Because SEC is a chemically inactive chromatographic technique, mass balance is also typically preserved as there is no sample loss due to interactions with the stationary phase.

In general, SEC is considered a low-resolution separation technique, as it does a poor job of discriminating between similar species of molecules and is consequently employed only for the polishing step of a purification process. Prior to a final polishing step, the intermediate puriï¬cation steps are designed to remove most of the process-related impurities, such as host-cell proteins, endotoxins, nucleic acids, and viruses.

The objective of using SEC as a polishing step is to achieve acceptable ï¬nal product purity by separating out any remaining trace impurities. Separations using SEC require a rather long residence time which makes SEC the most time intensive of the various modes of chromatography that are available for purification. Since SEC resins have no “capacity” per se, the size of the column is the main determining factor in the volume of sample that can be processed per cycle.

As a general guideline for polishing steps, the maximum sample size that should be loaded onto the column is between 1% and 5% of the packed column volume. For buffer exchange and desalting applications, larger sample volumes of approximately 30% of the packed column volume can be loaded at higher ï¬‚ow rates and at shorter bed heights than is typically used for a polishing step. It is therefore beneficial to use SEC only after process steps that reduce sample volume so that processing time is reduced and productivity is maximized.

Disadvantages of SEC
The major disadvantages to using SEC are that it is generally inefficient for processing large sample sizes, and with the exception of a few select applications, more efficient polishing steps can be employed using other chromatographic modes such as anion-exchange or hydrophobic-interaction chromatography. In addition, because the mechanism of SEC is driven only by the physical interaction between the molecules in solution and the stationary phase, separations performed using SEC are sensitive to variations in column packing. A properly packed column is vitally important when using SEC, as the number of theoretical plates and column asymmetry will have more of an effect on the overall separation than they do with other chromatographic modes that are driven by chemical interactions between the sample being purified and the ligand conjugated to the stationary phase.

New applications for SEC
SEC has experienced a bit of a resurrection in applications that require intermediate scale and simple size-based separations. In general, virus and virus-like particles are ideally suited to SEC. Governmental pressures to localize vaccine manufacturing in the country of origin also make SEC applications more attractive. The low technical threshold and ease of process development will streamline the manufacturing process so that the barriers to getting a product to market are reduced. Vaccine products generally require such low doses that even a 5- or 10-L scale column may be all that is required for production.

A recent trend in biopharmaceutical manufacturing is disposable or single-use technologies. If vaccine manufacturing becomes decentralized to locations throughout the world, as current trends imply, disposable or single-use technologies may be a significant driver. This is not to say that manufacturing plants will use the SEC resin for one run and then dispose of it, but the resin can be easily used for a single campaign, which on the 5- to 10-L scale indicated previously, would be enough to generate sufficient product for meeting the annual needs of a company. The low-cost/low-complexity use of SEC resins in single-use technologies would be ideal to alleviate growing economic concerns and would reduce costs by eliminating some of the validation expenses associated with long-term resin storage.

Virus purification is usually found in niche biopharmaceutical applications including vaccine development and in gene therapy vectors. In these applications, the separation is very efficient due to the large size differences between the components. This large difference eliminates the need to increase the bead particle size to allow for columns with longer bed heights to be packed, and eliminates the need for a column with a long bed height altogether.

The separations of antibody-drug conjugates from the unbound payload molecule are also amenable to SEC. In these types of applications, the payload molecule (usually a cytotoxin) is added in a significant excess compared to the amount of mAb. This stoichiometry is necessary to drive the loading of the cytotoxic moiety onto the mAb to the highest possible level. Removal of the unbound payload molecule, however, is required to eliminate potential serious side effects from the final preparation. Because the drug is generally in the size range of 500 to 2000 Da, the conjugated form of the antibody, in excess of 150,000 Da, is easily separated using SEC. The cytotoxic payload molecule is generally quite hydrophobic and may not separate well with membrane separations or even traditional adsorption chromatography.

Another recent advance in SEC resin development is the core shell or restricted-access media. In these cases, the resin matrix in the pore is modified with ionic charges, affinity ligands, or even hydrophobic groups, and the outer surface is left essentially inert. Only those molecules small enough to enter the pore and bind to the ligand are retained. The larger molecules continue to flow through the column unbound, similar to traditional SEC. The advantage here is that the loading capacity is not limited to a set volume of 1–5% of the total column volume. The limit is set by how many of the impurities can be bound by the “hidden” ligands inside the pore. Impurities such as endotoxins, incomplete virus particles, host-cell proteins, and other additives can be easily removed from a complex mixture.

In the future, 3-D printing may give SEC yet another life. This emerging technology offers the ability to provide perfectly packed columns with precise bead and pore sizes. Because the pore size distribution is responsible for the separating ability (or selectivity) of the resin, resins can be “printed” such that they are able to separate species of close molecular mass. Imagine a resin with a pore size distribution that is on the range of 10–20 nanometers rather than the several hundred or even thousand nanometer range that is currently available in commercial resins.

In conclusion, SEC has enjoyed a storied history since the early days of chromatographic separations. Indeed, as newer technologies are developed that try to drive separations from complex mixtures to binary separations, SEC will continue to be utilized in biopharmaceutical manufacturing. The simplicity of the separation mechanism and the power to separate large molecules or complexes from those smaller products or impurities not intended as an active pharmaceutical ingredient ensures that SEC will have a home in biopharmaceutical manufacturing for the foreseeable future.

About the Authors
R. Christopher Manzari is marketing manager for process media and J. Kevin O’Donnell, PhD, is process chromatography support manager, both at Tosoh Bioscience.

ALL FIGURES ARE COURTESY OF THE AUTHORS