Technologies and Practices Must Evolve to Meet Demand

Through Dec. 3, 2014, nearly 30% of FDA’s new drug approvals for 2014 were for biologic-based therapies, up from 7% in 2013 (1). As the percentage of large-molecule drugs grows, bioprocessing capabilities must keep pace with demand.

In the annual Manufacturing Trends and Outlook survey, the editors of BioPharm International polled bioprocessing development and manufacturing experts to assess challenges, preferences for different types of technologies, suggestions for technology improvements, and the adoption of practices to improve manufacturing efficiencies and results (2).

The respondents reported that they were involved in many phases of drug development and manufacturing including process development, drug-substance and finished product manufacturing, quality control, formulation, clinical-trial material manufacturing, and fill/finish.

Respondents to the 2015 survey who develop or manufacture protein-based drugs expressed less concern about protein stability challenges than their counterparts did in 2014. Regulatory issues and microbial contamination, however, were of greater concern for the 2015 survey participants. Producing high enough product yields, purifying high product yields, and protein aggregates were other top concerns.

Purification, stability, scale up, and achieving adequate expression levels of product were the top challenges identified by manufacturers of nucleic-acid based drugs in the 2015 survey, similar to the concerns expressed in the 2014 survey.

Process development remained the top concern for survey respondents involved in the development of cells for tissue or cell-based therapies, followed by cell stability, scale up, and costs.

Technologies report card
When grading the utility of existing technologies in meeting manufacturing needs, the survey respondents gave bioprocessing technologies good marks across all technology areas; however, they noted that improvements were needed. Chromatography systems, filtration, and centrifuges received marks of “excellent” from more than 20% of the respondents (Table I). Sampling systems, single-use systems, and sterile sampling received “poor” or “inadequate” grades from more than 19% of the respondents. 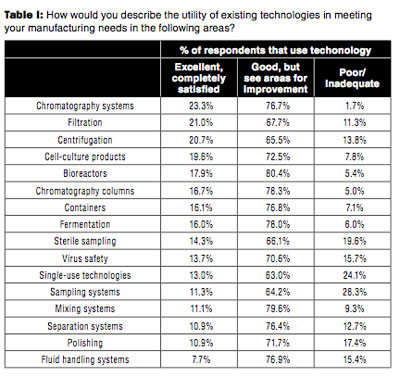 Survey participants also rated how the level of innovation in technology areas meets their current or future manufacturing needs. The majority of respondents rated most technologies as good, with some unmet needs. Cell-culture products, bioreactors, filtration, chromatography columns, and centrifugation received “excellent” grades from more than 24% of those surveyed. More than 10% of the respondents, however, rated sterile sampling and virus safety solutions as “poor” (Table II). 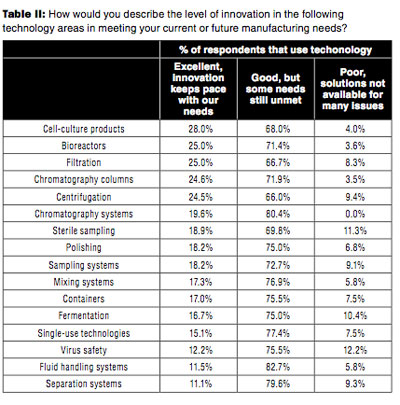 Respondents further identified problem areas. More than 30% of the respondents listed single-use technologies and bioreactors as sources of equipment failures that led to significant downtime or quality problems (Figure 1).


Figure 1: Are you aware of any equipment failure(s) that led to significant downtime or significant quality problems in the past year for these technology areas? (Multiple responses allowed) 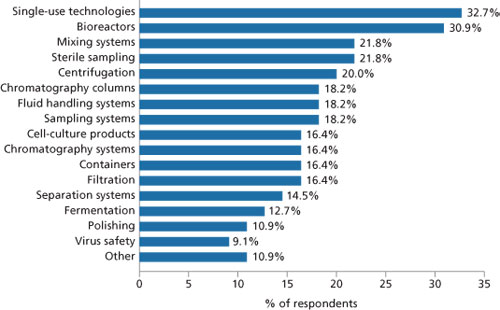 Hybrid systems still dominate
Hybrid manufacturing systems, which feature both traditional stainless steel and disposable, single-use products, were used by 71.4% of the respondents, a tally similar to the 74.4% reported in the 2014 survey; 15.9% use all stainless steel; 12.7% use all disposable systems.

Users of stainless steel, single-use, and hybrid systems identified time savings and reduced contamination as the greatest advantages to disposable equipment. Flexibility for multi-product manufacturing and ease of use were other key reasons cited. Leading concerns were high cost, the disposable material leaching into product, limitations on size, and a high environmental impact.

Process improvement efforts
In the 2014 survey, 68% of the respondents indicated that their companies had implemented quality by design (QbD). In the 2015 survey, this number grew to 72.5%. More than 76% of the 2015 respondents reported improved process understanding; nearly 60% cited increased efficiency or reduced waste as a result of implementing QbD. Barriers to implementation remain; almost half of the respondents cited a lack of knowledge or training; 39% noted a lack of clarity on regulatory guidance; more than 25% noted a lack of management buy-in.

Nearly two-thirds of the 2015 respondents reported that they employ process analytical technology (PAT). More than 42% cited better process understanding and increased efficiency or reduced waste as primary drivers for implementing PAT. High performance liquid chromatography was the leading technology, reported by more than three-quarters of the respondents. Other chromatography methods, spectroscopy, and disposable sensors were used by more than 40% of those responding.

Continuous advancement
The survey responses reveal that continuous manufacturing currently is not used widely, but bioprocessing experts surveyed are optimistic about its future use. Less than one-third reported that they currently employ continuous manufacturing in some segment of their operations; almost 18% plan to incorporate the technology in the next year. Reported roadblocks to implementation include insufficient expertise to adapt manufacturing processes to a continuous mode, a lack of proper equipment, and insufficient PAT. Nearly one-third reported costs and regulatory concerns as barriers to implementation.

Nearly two-thirds of those responding believe technology will evolve to permit full continuous manufacturing in five years; however, industry adoption may lag or the technology will be applied in select processes only, respondents say.