The Bullish Outlook for Biosimilars

There are several important reasons for stakeholders to be optimistic about prospects for biosimilars. During the past few years, questions about the underlying technology and market acceptance have begun to resolve themselves in a positive manner. Regulatory pathways are being defined, and major players and investments are lining up. Most importantly, a number of patents are set to expire on leading biologics, and financially strapped payers across the globe are anxious to embrace biosimilars and their promise of cost savings. Yet questions and uncertainties remain, and the path forward likely holds some surprises.

Update on the Global Biosimilar Market

The magnitude of the biosimilar market’s true potential can be illustrated by two simple measures: the substantial growth of biologics in recent years and the number of expected patent expiries for originator drugs. Biologics have become a significant part of the global drug market with sales growing from $20 billion (10% of the global drugs market) in 2000 to $159 billion (29% of the global drugs market) in 2014. Perhaps even more impressive is the fact that biologics represent approximately 70% of the value of the world’s top-10 selling drugs (1). This growth trend is set to continue, with more than 370 biologics currently in development, and pharma giants like AstraZeneca, Bristol-Myers Squibb, and Pfizer poised to have biologics represent a significant portion of their pipelines (2). Just this information is enough to warrant a bullish sense of optimism, not only for the innovator biologics market, but for biosimilars as well.

Now consider a looming patent cliff for many of these blockbuster drugs. More than $69 billion in biologics are scheduled to undergo patent expiries in major markets by 2018, with more biologics likely to follow (see Table I ) (3). Global biosimilar sales amounted to only $1.3 billion in 2013; that base is expected to grow to $35 billion by 2020, according to Thomson Reuters Bioworld (3). 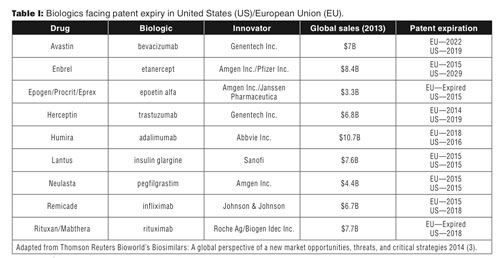 As healthcare costs continue to rise, there is a global imperative to find cost-effective countermeasures. Despite broad recognition that biosimilars may offer badly needed financial relief, certain markets are better positioned to capitalize on this opportunity than others. The global evolution of regulatory pathways for biosimilars has been uneven. Twenty-four countries now have biosimilar pathways or have approved follow-on biologics (4). 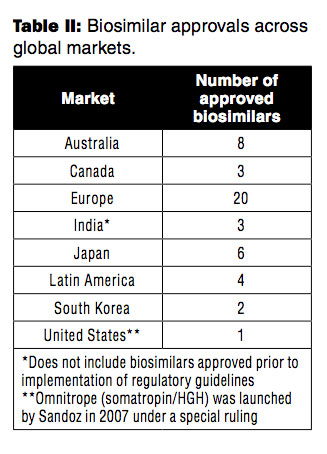 The EU established the first legal regulatory guidelines for biosimilars in 2005 and is already streamlining them. An approved revision aims to avoid unnecessary repetition of clinical trials, by allowing an applicant to use a comparator reference product from a country with a similar scientific and regulatory standard (5).


Since 2005, other established markets (e.g., Australia, Canada, and Japan) have drafted their guidelines based on the EU’s approval standards. Other markets, including emerging markets, such as Latin America and South Korea, have relied on both the European Medicines Agency (EMA) and the World Health Organization (WHO) for guideline development. Finally, biosimilars have been on the market in India and China for many years; however, these two countries just recently approved and implemented stricter regulatory guidelines that put a greater emphasis on efficacy and safety (6).

In contrast to these other markets, the United States has surprisingly been a laggard in establishing a formal path for biosimilar approval. FDA is still developing its final regulations and guidelines pertaining to biosimilar approval in the US. While not formalized yet, preliminary guidance suggests that this pathway will require the comparison of a biosimilar molecule to a single reference product. Similar to other markets, head-to-head comparisons will focus on product safety, purity, and efficacy. Unique to the US, FDA will designate these follow-on biologics as either ‘biosimilar’ or ‘interchangeable biosimilar’ based on the level of evidence submitted. While there is still plenty of uncertainty on how FDA will distinguish these two types of biosimilars on a product-by-product basis, there may be a distinct market access advantage for applicants earning an interchangeable designation. Some states have already passed laws that permit pharmacists to substitute an interchangeable biosimilar for a reference biologic without permission from the prescribing doctor.

Despite the slow pace of its regulatory development, the US appears to be getting close to its first wave of biosimilars, pending ongoing patent disputes. A few months ago, FDA accepted Sandoz’s and Celltrion’s biosimilar applications (7). The opening of the US market will mark a turning point. The cost of drugs has become a focal point of popular and industry dissatisfaction in the US, in spite of the relatively modest percentage of overall healthcare costs accounted for by pharmaceuticals (8). Biosimilar manufacturers are likely to find a receptive market in the US once they are allowed access, even if biosimilars can’t offer the dramatic savings of generics.

Expansion and adoption of biosimilars

Until recently, the global biosimilars market was primarily categorized into erythropoetins, human growth hormones (HGH), and granulocyte colony-stimulating factors (G-CSF). In 2013, the EU’s decision to formally approve both Remsima (infliximab) and Inflectra (infliximab)--the world’s first monoclonal antibody (mAb) biosimilars by Celltrion and Hospira, respectively--represented a milestone and gave rise to a new class of highly complex biosimilars. Celltrion has already obtained approval for Remsima from more than 50 countries worldwide, albeit with some restrictions around indications (9). To grasp the potential impact that mAbs will have on the biosimilar market, there are more than 600 mAbs currently in development for oncology alone (10). Together with the fact that insulin biosimilars are nearing market approval, these two classes are projected to account for more than 40% of the total global biosimilars market by 2018 (11).

Although the global biosimilar market is poised for substantial growth in the next decade as more regulatory pathways are established and as originator biologics continue to lose their patent exclusivity, the development and market entry of biosimilars alone won’t guarantee product adoption. IMS analyzed the uptake of biosimilars across the EU and reported significant variation between countries as well as biosimilar classes (see Figure 1) (12). Such variation likely reflects local pricing and reimbursement policies, stakeholder influence, and attitudes towards their adoption and use. 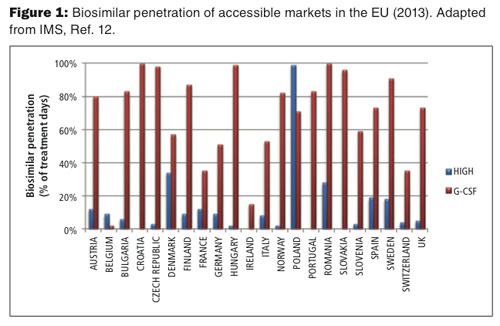 For example, biosimilar penetration for human growth hormone (HGH) was generally low and ranged from 2% in Norway to 99% in outlier Poland. Despite being offered at an approximately 20-25% discount, these drugs have failed to make a large impact on the market, largely because their originator counterparts offer greater convenience to patients (13). Caution among prescribers may have also played a role. Physicians have been hesitant to use HGH biosimilars given the time HGH takes to show a biological effect. In contrast, reduced safety concerns and adequate procurement mechanisms have helped boost G-CSF biosimilar penetration across the EU with nearly 100% share of the accessible market in Croatia, Czech Republic, Hungary, and Romania. In fact, clinical guidelines have been rewritten within specific hospital trusts in the UK to indicate a G-CSF biosimilar as a first-line therapy over the originator (14).

As established biosimilar markets continue to grow and new markets such as the US open up, there are important strategic implications for both biosimilar and originator manufacturers.

Understanding global policy and regulatory changes in different healthcare markets remains a requirement for success among manufacturers. In the dynamic biosimilar business segment, however, such an understanding is crucial for optimal market access because regulatory pathways and policies around interchangeability and automatic substitution differ by region and are constantly changing. For instance, while almost all EU countries have established rules against automatic substitution, France became the first country to allow pharmacists to substitute a biosimilar for a reference biologic (15). In Germany, physicians run the risk of being held accountable for exceeding target cost limits in prescribing, which is driving uptake for biosimilars. Manufacturers who are able to identify markets where access barriers may be reduced will have a greater opportunity to collect real-world evidence following market entry that can then be used to support subsequent launches in other countries.

Variation in biosimilar market penetration across the EU highlights the need for manufacturers to articulate what they are bringing to the table aside from just a lower cost alternative to appeal to the full range of stakeholders. Cost will be important to payers, but physicians and patients will also be interested in efficacy and safety data and the support services offered. Unless physicians truly understand the clinical and economic implications of biosimilars, they will most likely limit their use of biosimilars with patients. Medical Affairs functions will have an important role to play in educating opinion leaders around product nomenclature, product attributes, and comparisons to reference drugs. Following a product launch, manufacturers traditionally make themselves available to providers to address their questions or concerns and to monitor potential adverse events. A similar post-launch strategy is crucial for biosimilars.

More than 150 manufacturers are currently investing in biosimilar development, including many nontraditional players such as digital technology leader Fujifilm and electronics giant Samsung. Since there is already significant skepticism around biosimilar adoption, especially from providers and patients, familiarity with a manufacturer may influence prescriptions. Fujifilm and Samsung recently secured biosimilar deals with Merck and Quintiles, respectively. Pursuing ventures such as these may help smaller organizations overcome stakeholders’ skepticism at the time of product launch.

Originator manufacturers
Global sales of originator biologics such as Remicade (infliximab) continue to flourish. In fact, the product saw 7% growth in sales in late 2014, pushing total annual revenue past the $3 billion mark (16). As biosimilars flood the market and as manufacturers generate the necessary economic and clinical data to support the use of these products, however, originator companies will need to protect their branded product’s market share. Some organizations are already trying to put barriers in place to delay biosimilar market entry and/or restrict biosimilar market access. These efforts have included: patent litigation or extension; debates regarding nomenclature and product labeling; sponsoring legislation to prevent pharmacists from switching to biosimilars; and campaigns seeking to raise concerns about the safety and efficacy of biosimilar products while highlighting the benefits of a company’s own products. While these strategies have yielded short-term success for some organizations, they are not sustainable. Long-term success for originator manufacturers will require a different strategic approach.

Branded biologic manufacturers have been swift in moving to safeguard their market share by launching upgrades to their off-patent biologics called biobetters. Following traditional product-line extension approaches, many of these biobetters are sustained-release formulations of the existing drug, which can provide enhanced convenience and prolonged effect. While this strategy may slow share erosion, they are not an effective bulwark against price erosion. As markets become more crowded and competitive on price, added benefits provided by biobetters are unlikely to justify premium reimbursement, let alone their placement on formularies.

Manufacturers of branded biologics will find value in conducting a thorough review of their patient, physician, pharmacist, and supply chain support programs to identify opportunities for implementing valuable, hard-to-replicate services (17). Here, value-added services may include patient education programs to teach patients how to use and store injectables or patient management programs aimed to help physicians maximize outcomes. The focus should be on offerings that enhance clinical outcomes and strengthen relationships with key stakeholders. Taking this approach will raise the bar on what it takes to be “market similar” by forcing new entrants to demonstrate how their product adds value through both its therapeutic and service characteristics.