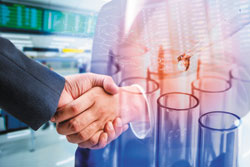 A year ago, the outlook for contract services was a little uncertain. Equity markets’ appetite for public offerings from emerging bio/pharmaceutical companies had significantly diminished: valuations of emerging bio/pharma companies, as measured by the NASDAQ Biotechnology Index (NBI), had declined by 15% from their highs in mid-2015, and by mid-February, they were off another 28%. Because contract development and manufacturing organizations (CDMOs) and contract research organizations (CROs) get so much of their business from externally-financed companies, the negative energy surrounding emerging bio/pharma did not bode well for the industry.

The valuations and levels of public offering activity in 2014 and 2015 were not sustainable, and the NBI has never gotten back close to the levels it reached in 2015. Nevertheless, fundraising by emerging biopharma companies held its own in 2016. Financing for emerging bio/pharma from venture capital, public equity, and partnering sources was ahead of 2013 levels, and those companies showed no fear of spending liberally to progress their pipelines though clinical development. Public reports for more than 300 companies tracked by PharmSource show that R&D spending by those companies has risen every quarter since the beginning of 2015.

Not surprisingly, this has been great news for CDMOs and CROs. Most publicly-traded services providers achieved revenue growth well in excess of 10% in 2016 (based on interim results), especially in those services that cater to clinical development (clinical supplies manufacturing, analytical services, clinical packaging, and clinical research). Many CDMOs have told PharmSource that they are operating near capacity, and customers may have to wait as much as six months for a manufacturing slot. 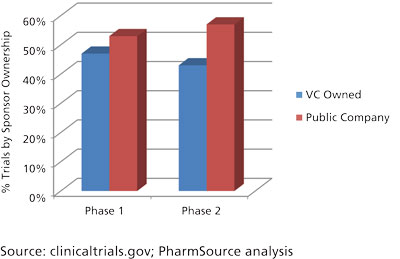 The bio/pharma industry’s recent performance is encouraging, but what is really important is what the industry can expect going forward. There is a sense that the outlook is positive but with some significant uncertainties.

Clearly, general economic sentiment since the November 2016 presidential election has been positive, with an expectation that the regulatory environment will be less restrictive and FDA will be approving more drugs more quickly. There have even been suggestions that a venture capitalist might be appointed to run the agency (no appointments had been announced at the time this column was written). However, emerging bio/pharma investors haven’t been moved much by this news as the NBI has remained at the same level it has been at for the past 12 months.

Enthusiasm for the bio/pharma industry may have been dampened by the president-elect’s campaign promise to go after high drug prices, including allowing Medicare to directly negotiate drug prices. The dismantling of Obamacare could further reduce spending on drugs, especially in hospitals and other institutional settings. Coupled with the aggressive efforts by pharmacy benefit managers to reduce private sector spending on drugs by reducing utilization and prices, overall drug spending is likely to face considerable headwinds. That could dampen new investment in the industry, especially if it becomes more difficult for novel treatments to get formulary access.

One positive indicator for CDMOs and CROs is the robustness of venture capital investment. Venture capital money has always been more dependable than public equity, even during the years of the global financial crisis. In 2016, even though public equity dropped considerably, venture capital maintained a pace that was close to what it was in 2015 and nearly 60% higher than it was in 2012. Looking ahead, according to the blog Life Sci VC, life-science venture funds are raising record amounts of new money that can sustain emerging bio/pharma companies for an extended period (2).

So the stars seem to be aligning for a continued healthy environment for CDMOs and CROs. The biggest risks will come from what happens to drug pricing and coverage; and from a system-wide economic shock that negatively impacts the entire economy. The former is likely but over an extended number of years; and the latter can’t be predicted.