Trends in BioPharma Approvals in 2013

In 2013,  20 products containing new biopharmaceutical molecular entities (defined herein as recombinant proteins, monoclonal antibody or biosynthesized nucleic acid-based products) were approved in the United States and/or the European Union (see Table I, in the download on page two).

Approval numbers for 2013 are above average as compared to the previous five years, which recorded a mean approval rate of 13 products (1-4). This annual approval rate was equalled only in 2009, a year in which 20 new products came on the market (see Figure 1). 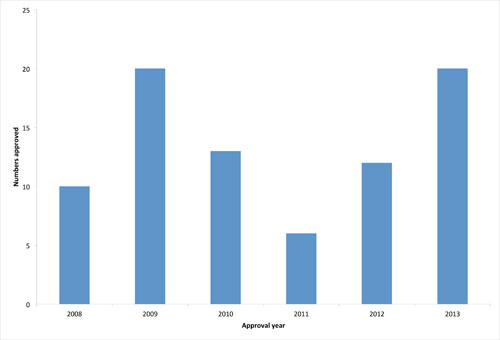 Twenty approvals, by any metric, is a healthy headline number. Digging a little deeper, however, reveals that just over two-thirds of these (a still credible 14 products) were genuinely new first time approvals. Six of the products, although newly approved in one region last year, had gained approval prior to that in the other region (Table I). Moreover, a significant difference in the absolute approval numbers was witnessed in the regions. A total of 16 approvals were recorded in Europe, while only six biopharmaceuticals came on the market in the US in that same period. This trend can partly be explained by Europe playing catch up in the case of some products; five of Europe’s 16 new approvals were already on the US market prior to 2013.

Overall, 2013 can be considered quite a successful year in terms of new product approvals. Several of those newly approved products underpin particularly noteworthy technical, medical, or regulatory milestones, and are thus the focus of the remainder of this article.