Will My Buffers Work When Using an Inline Conditioning System? 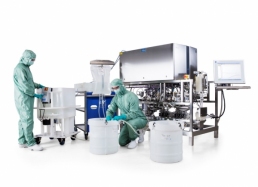 Buffer preparation can be both time and space consuming and can easily become a challenge in biomanufacturing. In-line preparation of buffers from highly concentrated, single-component stock solutions saves both time and storage space. Compared with preparing one concentrate per buffer formulation, many different buffers can be prepared from the same stock solutions using Cytiva’s Inline Conditioning system.

With the Inline Conditioning system, buffers can be formulated just-in-time in an automated manner. The system can be used off-line as a standalone central buffer preparation station to feed different processes in the facility or in-line connected to a chromatography column using a built-in chromatography functionality. Compared with preparation of buffers as a separate operation, the integration of buffer preparation with the chromatography step both saves time and reduces facility footprint. Feedback control of the preparation process ensures accurate formulation of the final buffer, and the automation enables high consistency between batches. Compared with traditional buffer preparation, in-line conditioning can help increase efficiency in buffer production for biomanufacturing applications.

Will my specific buffers work? This is one of the "Frequently asked questions’" for Inline Conditioning systems. Find the answer in this summary.